Putin: Elton John Is Wrong About LGBT Culture in Russia 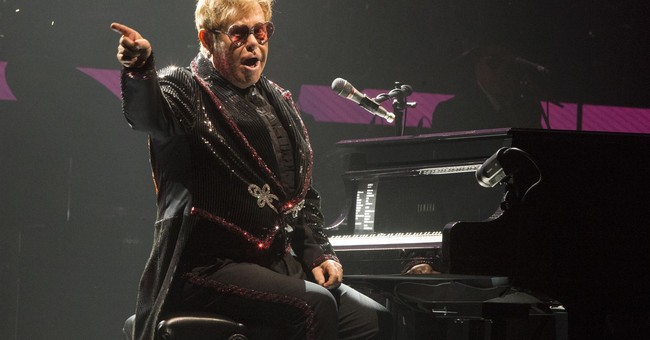 The Kremlin has been criticized and investigated by watchdog groups for its reported discrimination against LGBT individuals, particularly with President Vladimir Putin in charge. In 2013, critics point out, Putin passed a law banning the promotion of "nontraditional sexual relationships" to children. More recently, a gay sex scene was edited out of the Elton John biopic Rocketman at its Moscow premiere, as well as a mention of the singer's relationship with David Furnish and their wanting to raise children.

That's why, when Putin told the Financial Times last week that his government has "no problem with LGBT persons," Sir Elton took issue with it. The "Rocket Man" himself addressed an open letter to Putin on Friday with the following message.

"I find duplicity in your comment that you want LGBT people to 'be happy' and that 'we have no problem in that,'" Elton John wrote. "This feels like hypocrisy to me."

Putin read the letter, but his mind has not changed. He added that it was Sir Elton, not he, who was wrong.

"[Elton John] is mistaken," Putin said, according to the Russian state-run news agency TASS. "We [in Russia] have a very neutral attitude to members of the LGBT community. We have a law, for which we've been slammed, a law banning propaganda of homosexuality among minors."

In his Financial Times interview, however, Putin did say that he was wary of a culture in which people are encouraging children to "play five or six gender roles.”

"Let everyone be happy, we have no problem with that," Putin said. "But this must not be allowed to overshadow the culture, traditions and traditional family values of millions of people making up the core population."

Despite his societal disagreement with Sir Elton, Putin appears to at least enjoy the singer's music.

"I respect him very much, he is a genial musician," the president said. "He comes to Russia and we are happy to listen to him sing."