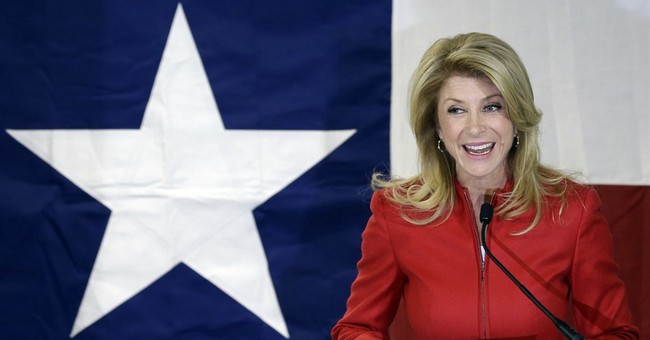 Wendy Davis and her pink sneakers are reportedly running again. The former Texas state senator ran a spirited, yet unsuccessful campaign against Greg Abbott in the 2014 gubernatorial race after gaining national fame for her 13-hour filibuster against a pro-life bill in 2013 that banned abortions after 20 weeks. Her pink footwear, which she wore for comfort, became a sort of trademark for the Democrat. The filibuster won her some fans but, again, her effort did not pan out. Former Gov. Rick Perry eventually signed the pro-life bill into law.

Her 20-point loss defeat to Abbott kept her out of politics for several years, until now it seems. A Dallas News reporter at the Texas Observer dinner Thursday night reported that Davis is thinking about challenging Rep. Chip Roy (R), who is currently serving his first year in Congress, in Texas’s 21st congressional district.

Davis herself has yet to confirm the rumor, but, according to the Dallas News, she plans to do that in just a few weeks.

Just spoke with @wendydavis at the @TexasObserver Molly Awards Dinner. She says she’s not announced any challenge to @chiproytx, will be ready to confirm her future plans in about 3 weeks. #txlege

Davis's infamous filibuster made her a hero among liberals, but earned her the name "abortion Barbie" from some conservatives. Her agenda, I would think, is still a bit too extreme for the red Lone Star State.

The incumbent, Rep. Roy, narrowly won his congressional race in the fall. He previously served as chief of staff to Sen. Ted Cruz and as senior advisor to Gov. Perry.