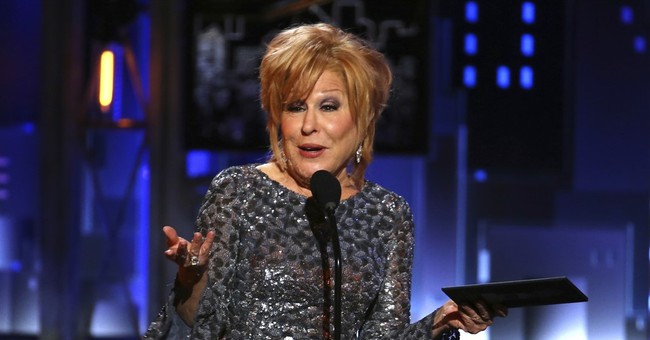 Singer and actress Bette Midler is one of the many celebrities to share her hate for Trump on Twitter. Her insults have certainly given Cher, Trump's original tweeting nemesis, a run for her money. Midler has felt no need to apologize, until she attributed a quote to the president that didn't exist.

Rumor had it that in a 1998 People Magazine interview, Trump said that Republicans were "the dumbest group of voters in the country.” The quote proved that he "knew his audience," Midler tweeted this week.

Yet, after reading a fact check that debunked the statement, the actress offered the following regrets.

I apologize; this quote turns out to be a fake from way back in ‘15-16. Don’t know how I missed it, but it sounds SO much like him that I believed it was true! Fact Check: Did Trump say in '98 Republicans are dumb? https://t.co/NY9s6V49el via @rgj

She was soon back to her old ways, tweeting out several messages mocking Trump's appearance and intellect.

Queen Elizabeth gave Trump #WinstonChurchill’s copy of a rare book. Even more rare? The chance that Trump would actually read it, or ANY book.

PROPORTION FAIL!! His white waistcoat is at least two inches too long; tailcoat is supposed to be almost the same length as the waistcoat beneath, sleeves should be shorter and show a bit of the cuff below, waist itself is nipped in...what a figure he cuts! Fire the tailor!! https://t.co/6eeLMAOaF1

Midler has often defined Trump as an ogre, even when he's reached out to different communities. When he tweeted his support for Pride month the other day, Midler responded with a note he has done nothing for gay rights. Actually, the actress said, he "has harassed LGBTQ Americans since he took office." She added that he was "mental."