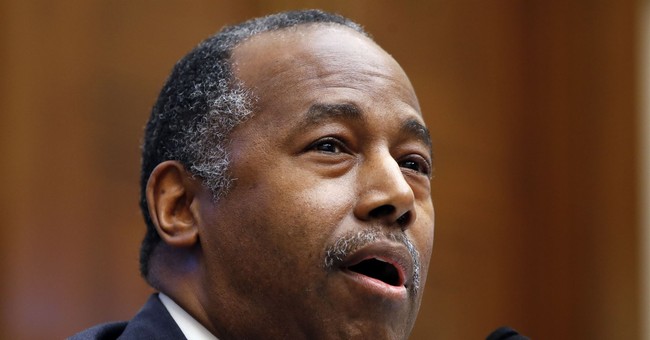 While most media are reporting on Housing and Urban Development Secretary Ben Carson confusing an Oreo cookie with a housing term, there was more to analyze at Tuesday's House Financial Services Committee hearing. Democrats grilled Carson about a new agency policy that would end public housing assistance for individuals who are in the country illegally. They also questioned his qualifications for good measure.

Chairwoman Maxine Waters (D-CA) set the tone by accusing Carson of leading an agency that is "actively causing harm," sentiments that were shared by other Democrats on the panel.

"It pains me that your gifted hands are doing the bidding and carrying the water of what I believe to be one of the most morally bankrupt president's history," Rep. Ayanna Pressley (D-IL) told the witness. "Increasing rents, evicting families."

CLIP: Complete exchange between Rep. Pressley and Secretary Carson.@SecretaryCarson: "Reclaiming my time."@RepPressley: "You don't get to do that."

Carson: "Oh."@RepMaxineWaters: "The time belongs to the gentle lady." pic.twitter.com/HFlS749tji

She went on to accuse the White House of intentionally lowering public housing standards and asked Carson pointedly, do substandard safety conditions affect tenants' health? He refused to answer the obvious question and accused Pressley of playing politics.

Rep. Carolyn Maloney (D-NY) called the policy "despicable" and wondered how members of HUD could live with themselves knowing they were displacing thousands of families and leaving 55,000 children on the street.

Carson defended the policy by pointing out how it comes with a six-month deferral period, which can be renewed twice.

"For a total of 18 months, which is plenty of time for Congress to engage in comprehensive immigration reform so that this becomes a moot point," he said.

Pressley was also one of several Democrats on the panel to basically tell Carson he's in the wrong field.

"Today you are not here as a doctor or even as our surgeon general, which I think might be better suited for your talents, but as the official task of leading the agency overseeing our nation's crumbling housing stock," she noted. "And for that I do believe you are unqualified."

But the Democrats weren't the only punchy ones at Tuesday's hearing. Carson had plenty of comebacks for the panel, including his suggestion that Rep. Maloney explain to legal residents waiting years for housing why the government is letting illegal immigrants jump ahead of them in line.

"If in fact you want to explain to the American citizens who have been on the wait list for several years in your district in New York why we should continue to support families who are not here legally, I would be happy to join you in helping explain that to them," Carson said.