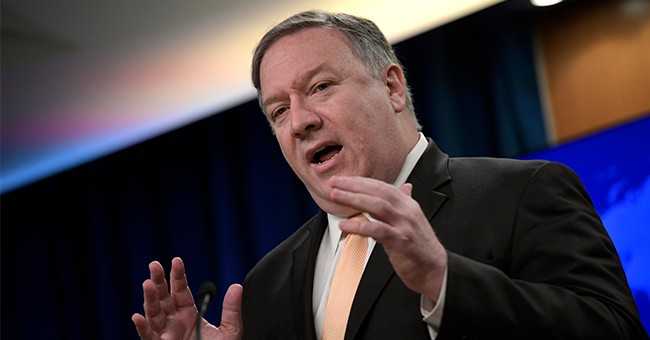 Democratic presidential candidate and South Bend, Indiana Mayor Pete Buttigieg continues to feud with Vice President Mike Pence. It is common knowledge that Pence, a conservative Christian, is opposed to gay marriage. He's candidly shared his belief that it is a sin, clearly forbidden in the Bible. Hence why he would be opposed to Buttigieg's marriage to a man, Chasten Buttigieg. Yet, despite their fundamental disagreement on the issue, Pence has noted how the two lawmakers still managed to get along for years when he was the governor of Indiana. He is now confused as to where all this criticism is coming from and can only guess Buttigieg is picking the public fight because of his new presidential ambitions.

This might not be something Secretary of State Mike Pompeo particularly addresses, but Hewitt, wanting Pompeo's reaction, made the tricky transition from Iranian aggression to Buttigieg's charges against the VP.

"Well, this is a diversion from Iran, but I’ll come back," Hewitt said. "I had Mayor Pete Buttigieg of South Bend on my show Friday. He assesses your friend and mine, Vice President Pence, as a 'homophobe' on the basis of his, he said, actions. He ignores the fact that the Vice President swore in Grenell while the Ambassador’s partner held the Bible. He said judged by your actions. And Ambassador Grenell is leading this decriminalization effort of LGBTQ. Is the Vice President fully on board with that program?"

"Oh, goodness," Pompeo answered. "I’ve known Mike Pence, Vice President Pence, for an awfully long time now. This is a fundamentally decent man who, just as I described, shares the administration’s view with respect to how every human being should be treated. To say anything different from that is both false and frankly slanderous."