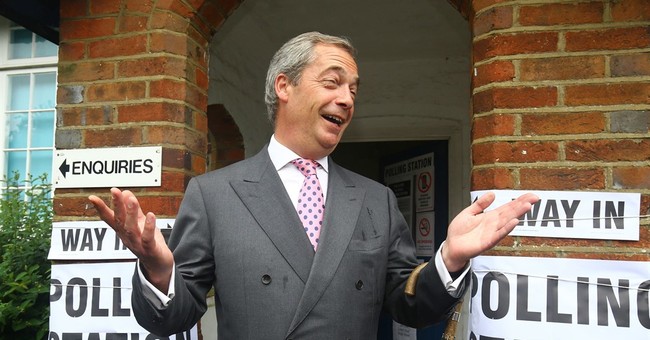 Brexit Party leader Nigel Farage was victim to the latest epidemic in Britain this week: "milkshaking." A critic of Farage pelted him with a milkshake, leaving the politician annoyed at both the assailant and his security detail.

In the video, you can hear Farage criticize his security team, calling the affair a "complete failure" and that they should have spotted the milkshake man a mile away. The culprit has since been arrested under suspicion of common assault.

"Milkshaking" is the new form of protest in Britain against "right wing" lawmakers.

"The deed has become so prevalent that police have even tried preventing people from buying milkshakes near political rallies," The Atlantic reports. "Some places, like this McDonald’s in Edinburgh, honored a request by police not to sell ice cream or milkshakes because of their proximity to a Brexit Party rally."

Throwing ice cream is certainly one way to get a politician's attention, but it's hardly the most effective. Even Farage's critics will tell you that.

Throwing milkshakes over @Nigel_Farage is pathetic & will make him even more popular.
The left in the UK, as in the US, are now experts at little else but political self-harm. pic.twitter.com/KZjG4eMJFX

Farage left British politics shortly after the Brexit campaign prevailed in the 2016 referendum. He's returned a few years later because Prime Minister Theresa May has failed to deliver a Brexit deal that is honest to its original intent. Parliament rejected her plan three times - even after she offered to step down as prime minister. These days she's trying something new - if MPs vote in favor of her Brexit plan, she'll present them a chance to vote on a second referendum.