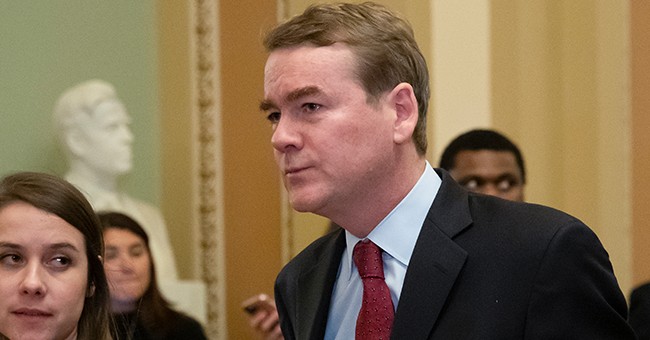 UPDATE: The Democratic lawmakers weren't the only ones who politicized Wednesday's vigil.

A hero student died while trying to save his peers during the shooting at the STEM School in Highlands Ranch, Colorado on Tuesday, where two students opened fire on their classmates. The hero, Kendrick Castillo, was only 18, and his peers showed up to a vigil at Highlands Ranch High School on Wednesday to honor him. It was no place for politics, but two Democratic lawmakers didn't get the memo.

In their remarks, Rep. Jason Crow and Sen. Michael Bennet reportedly began rallying attendees to join them in the fight for gun control. Some students were so frustrated that the Democrats were using the memorial for political reasons that they walked out of the vigil.

Students from the #STEMshooting in Colorado stormed out of a rally organized by gun-control advocates Wednesday night after growing angry about the politicization of their trauma. pic.twitter.com/uCLEqt89VY

They later returned, but with the following messages.

“What has happened at STEM is awful, but it’s not a statistic,” one student told the crowd. “We can’t be used [as] a reason for gun control, we are people, not a statement.”

The crowd cheered loudly in response.

“This was not a vigil. This was purely a political stunt. This is not what we wanted for Kendrick,” said another student.

“We didn’t want Kendrick to be a prop. We wanted Kendrick to be mourned, we wanted all of you to join us in that mourning, but that was not allowed here.”

Sen. Bennet, who recently announced he's running for president, should have taken a note from his Twitter page, which was much more sensible and rightfully kept the attention on Kendrick.

We should never expect our students to be heroes, but yesterday Kendrick became one.

He should have been preparing for graduation. Instead, he bravely lunged at a gunman and saved his classmates.

We will never forget him. https://t.co/cMF72eoWLb

Eight other students were injured in Tuesday's attack. The assailants made their first appearance in court Wednesday and are expected to be charged with first degree murder and attempted murder.

You can learn more about Kendrick Castillo here. His classmates call him a "legend" and his family says he was "the best kid in the world."