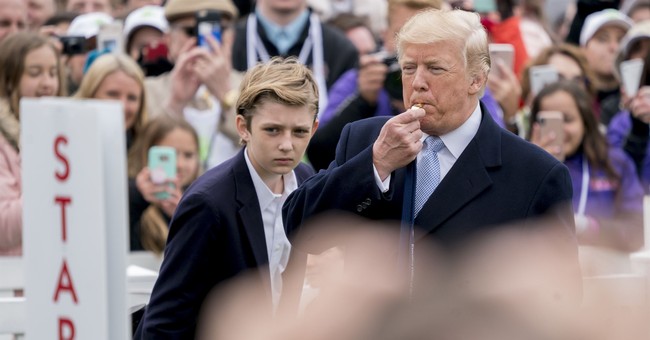 This week's scandal over the Special Olympics apparently gave one Ohio Democrat an opening to attack President Trump and First Lady Melania Trump's 13-year-old Barron. Education Secterary Betsy DeVos had curtailed funding for the program, until Trump overruled her on Thursday. Before he did, Ellen Connally, a member of the Ohio Democratic Party, posted a callous message on her Facebook page suggesting that Barron may one day need the funding. RedState shared a screenshot of the post after she took it down.

"Trump kills funds for Special Olympics," she wrote. "Baron may need it some day."

Connally appears to have plenty of influence in Ohio, having been Cuyahoga County Council president and Cleveland Municipal Court judge.

Because the children of commanders-in-chief stick together, Chelsea Clinton has been one of Barron's most vocal defenders. On Twitter the past couple of years, she's condemned media who have dared to pick on him, reminding them he's just a kid. You may not like his father's policies, she reasoned, but Barron deserves a childhood just like anyone else.

It's high time the media & everyone leave Barron Trump alone & let him have the private childhood he deserves https://t.co/Wxq51TvgDX

Likewise, Jenna Bush Hager piped up when media were scrutinizing the actions of Malia Obama.

Hesitant to add anything to such a nothing-story, but agree with @ChelseaClinton whole heartedly. Please don’t click on silly stories and let’s give Malia privacy. https://t.co/oRnKq1quPA

Suffice to say, they'd be horrified by the Ohio Democrat's new message for Barron.

Of course, President Trump himself has been accused of being too mentally unfit for office.