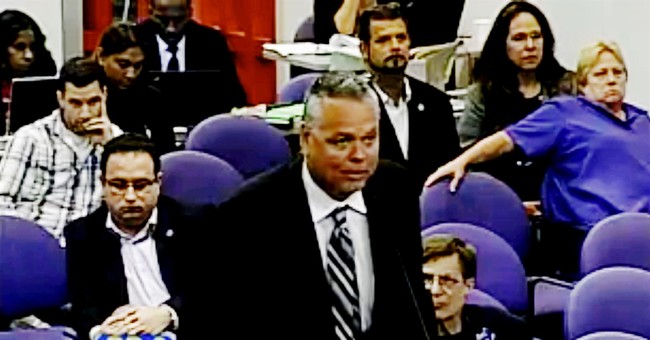 Parkland student Kyle Kashuv has often spoken out against Scot Peterson, the school resource officer who failed to act during last year's mass shooting at Marjory Stoneman Douglas High School (MSD) when 17 students and teachers were gunned down. He's sounded off on Twitter, during TV appearances, in court, etc. On Monday, he said it to his face. A reporter captured the moment Kashuv found himself in an elevator with Peterson and reminded him of how he seemingly made no effort to save his classmates.

Deputy Scot Peterson hid outside while 17 of my classmates and teachers were massacred at Stoneman Douglas.

Today I confronted him, face to face, for his crimes.

Watch this coward for yourself. pic.twitter.com/d5WQuohXfL

“Can you explain to me why 17 people died in school? Fourteen kids, 17 while you stood outside with a gun and did absolutely nothing?” Kashuv is heard asking Peterson.

"It's disgusting, it's despicable," Kashuv said, amazed that the officer got paid $80K a year to "stand there."

“I don’t know how you live with yourself every day, man," Kashuv added. "

Kashuv's confrontation got noticed by influential figures like former U.S. ambassador to the UN Nikki Haley. She commended the student for his courage.

This took a lot of courage @KyleKashuv . You stood up for your friends who no longer have a voice. ?? https://t.co/nSyltsFlaO

When a 20-year-old gunman opened fire at MSD last February, Peterson never made his way into the building. Instead, he stood in a defensive position for four minutes. He resigned after he was suspended sans pay. Yet, in an NBC "TODAY" interview, Peterson blamed his stunted movement on miscommunication and his inability to decipher the sounds (gunshots) he was hearing. That explanation, as you can imagine, did not appease Kashuv, his peers, or the Parkland parents who lost children in the massacre. All they see is a man who failed to do his job.

Broward County Sheriff Scott Israel was not one for accountability either. He told media that he had properly trained his officers, and that what they did with that training was up to them. He described his leadership as "amazing."