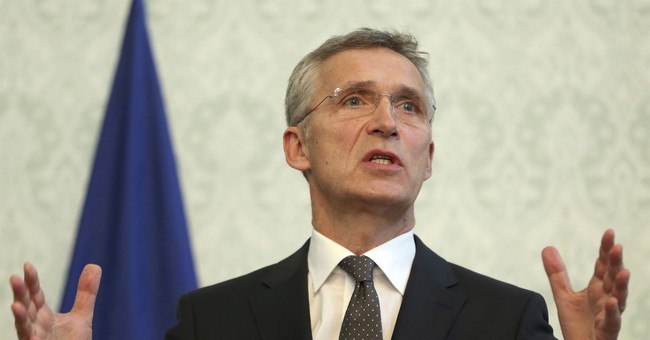 This weekend NATO Secretary General Jens Stoltenberg commended President Trump’s tough rhetoric for the alliance and explained how it has produced real results. In the past two years Trump has often demanded more financial contributions from the other members because it's unfair that the U.S. "is paying for 90 percent" of NATO. At last July's summit, he even called the other nations "delinquent." They committed to spend two percent of GDP on defense, but they are "nowhere close" to reaching that demand. Thanks to Trump's tough talk, however, many of those countries have now pledged to increase their contributions.

.?@jensstoltenberg?: thanks to clear message from ?@realDonaldTrump?, the ?@NATO? members added $100B to alliance spending ...it’s clear Trump’s message had a huge impact. pic.twitter.com/YiKTo5OvaI

“He has clearly stated that NATO allies need to invest more,” Stoltenberg said on Fox News over the weekend.

By the end of next year, he was happy to announce, allies will add $100 billion extra U.S. dollars for defense.

"We see some real money and some real results," Stoltenberg noted. "And we see that the clear message from Donald Trump is having an impact. NATO allies have heard the president loud and clear and now NATO allies are stepping up."

“This is good news,” he added. “We actually see more fair burden sharing.”

Jens Stoltenberg, NATO Secretary General, just stated that because of me NATO has been able to raise far more money than ever before from its members after many years of decline. It’s called burden sharing. Also, more united. Dems & Fake News like to portray the opposite!