Here's How Rep. Omar Defended Her Past Anti-Semitic Remarks 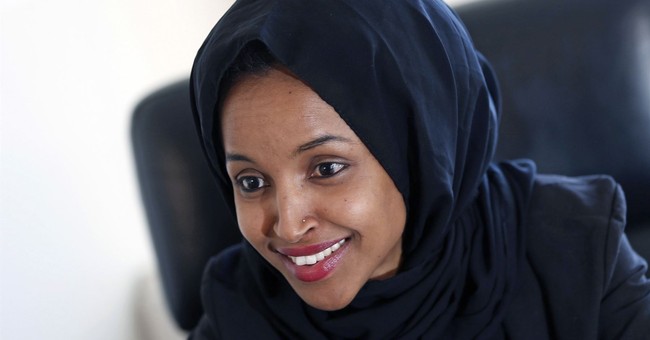 Rep. llhan Omar (D-MN) is getting so much backlash for her salacious accusations about Sen. Lindsey Graham (R-SC) that you may have missed her other head-scratching comment on Thursday. In November 2012, Omar sent a tweet most would agree is anti-Semitic.

Israel has hypnotized the world, may Allah awaken the people and help them see the evil doings of Israel. #Gaza #Palestine #Israel

CNN's Christiane Amanpour asked her what that was all about. According to the representative, the above words were the only ones she could come up with.

"I remember when that was happening," Omar said, before trying to explain. "Watching TV and really feeling as if no other life was being impacted in this war, and that really, those unfortunate words were the only words I could think about expressing at that moment."

She went on to insist that she was criticizing the Israeli military, not a faith.

"What is really important to me is that people recognize that there is a difference between criticizing a military action by a government that has exercised really oppressive policies and being offensive, or attacking to a particular people of faith."

She again tried to clarify things on CNN, with similar success.

"That’s a regrettable way of expressing of that," Omar explained, noting again that she was "clearly" talking about Israel's military action in Gaza.

.@IlhanMN: Israel has hypnotized the world, may Allah awaken the people & help them see the evil doings of Israel.

.@CNN: What’s your message to Jewish Americans who find that offensive?

.@IlhanMN: I don’t know how that is offensive to Jewish Americans.pic.twitter.com/vxMv6hEHj1

Omar's anti-Israel sentiments appear to be shared with her colleague Rep. Rashida Tlaib (D-MI). Tlaib, whose congressional tenure started with a profane rant against President Trump, recently condemned an effort by Sen. Marco Rubio (R-FL) to thwart the Boycott, Divestment, Sanctions movement. The campaign's goal is "to stop selling products from companies profiting from Israel's crimes," according to its website.

Rubio's legislation would punish companies who take part in the BDS movement. Tlaib, however, argued it's a First Amendment issue and accused Rubio of trying to restrict freedom of speech.

Want to know why it has been so hard to pass my Anti-BDS bill?

Because some of the democratic party’s newest “stars” view #Israel as a rogue state we should punish not an ally we should be supporting.

Rep. Omar was recently appointed to serve on the House Foreign Affairs Committee. GOP leader Kevin McCarthy criticized the decision, especially considering that both Speaker Nancy Pelosi and Senate Minority Leader Chuck Schumer have condemned the BDS movement in the past.

“Nancy Pelosi said in 2017 that Congress ‘must’ oppose the BDS movement against Israel. Chuck Schumer went even further, calling BDS ‘anti-Semitism’ and ‘profoundly biased,’" McCarthy said in a statement. "I would love to know what changed because Democratic leaders just promoted a pro-BDS Democrat to a key committee that deals with the State of Israel."

"The House Democrat Leadership should immediately condemn Rep. Omar’s anti-Semitic and anti-Israeli views. Anti-Semitism can never be allowed to stand, in any form or forum. It is shameful for it to be ignored by the Democrat leadership in the House. Rather than condemn these abhorrent views, Speaker Pelosi and the House Democrats are elevating Rep Omar. We call on them to correct this immediately."