GOP Senators Are Reportedly Giving Pence an 'Earful' on Syria 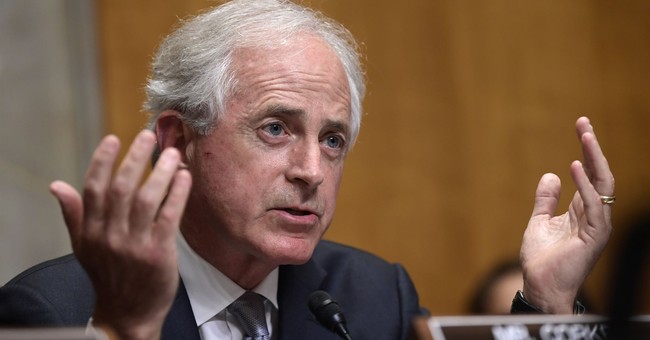 Vice President Mike Pence met with an irritated group of Republican senators on Wednesday who are unhappy with President Trump's decision to pull U.S. military troops out of Syria. According to outgoing Sen. Bob Corker (R-TN), they gave the vice president an "earful" about it. They are angry both about the decision, and that they were not given a say on the matter.

CORKER told me GOP senators are giving Pence an “earful” about Syria in lunch right now.

“It doesn’t feel to me there was any interagency process” in deciding to pull out.

“I’m not sure even the principles knew,” referring to agency heads, adding Trump just “woke up” and did it

Before the contentious lunch meeting, some senators first expressed their frustration on Twitter, even Lindsey Graham, who was deemed "Lindsey Graham 2.0" this year for becoming one of Trump's biggest cheerleaders. On Wednesday he changed his tune, telling Trump that his new foreign policy was no better than his predecessor's, who you'll remember failed to enforce his "red line" against Syria after Bashar al Assad's use of chemical weapons.

Graham, along with the likes of Rep. Adam Kinzinger (R-IL), also chided Trump for suggesting they had wiped out ISIS.

Withdrawal of this small American force in Syria would be a huge Obama-like mistake. https://t.co/atsjHUyJlB

This is simply not true. https://t.co/Jvie2NxgWz

Groups concerned with Middle East issues are just as concerned by Trump's announcement. The Endowment for Middle East Truth sounded off in a press release Wednesday.

"By removing U.S. troops from these areas in Syria, the U.S. endangers moderate forces in the region and empowers many bad actors," the group noted. "First, this will likely allow the Islamic State forces to rebound, in a manner similar to what occurred when the U.S. removed troops from Iraq in 2011."