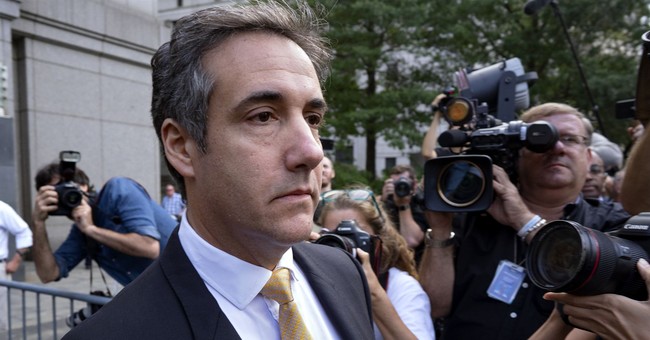 LISTEN: @BillHemmer spoke with @AlanDersh after reports that Michael Cohen is expected to plead guilty to making false statements to Congress in the Russia probe #nine2noon pic.twitter.com/sfVW9EwZJL

Dershowitz suggested that Cohen is now cooperating with Mueller's team because the special counsel does not have his report finished yet.

"They’re perhaps trying to fill some blanks because they’ve lost Manafort as a witness and of course he’s unlikely to be a witness," Dershowitz suggested.

"They’re probably hustling to get a new witness to fill some of those gaps. He’s constitutionally entitled to have contact with foreign powers. Mueller’s case has never been a very strong one against the president legally and constitutionally."

The lawyer continued to sound off on the "weakness" of the Russia probe.

”I think the weakness of Mueller’s substantive findings are suggested by the fact that he has to resort to false statement prosecutions, which really shows that he didn’t start with very much, and the very fact that he’s conducting an investigation has created these crimes.”

Last week, Dershowitz gave President Trump kudos for submitting written answers to Mueller to avoid his "perjury traps." Still, the lawyer predicted that the final report would be politically devastating to the president.

Some Democratic lawmakers take a different approach to the investigation and the Trump team's "obsession" with it.

"There seems to be a trend here among the president's closest allies," Sen. Mark Warner (D-VA) said on Capitol Hill. "That they don't tell the truth."

But, Trump no longer claims Cohen as an ally. He called his former lawyer a "weak person" on Thursday and accused him of "lying to get a reduced sentence."

#BREAKING: President Trump responds to Michael Cohen’s guilty plea: “He’s a weak person, and what he’s trying to do is get a reduced sentence.” pic.twitter.com/F0gu5B9OvK