Andrew Cuomo Is Still Governor...But He Only Won How Many Counties North of NYC? 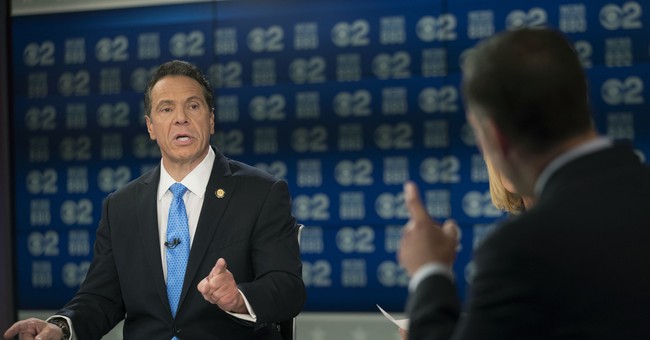 New York Gov. Andrew Cuomo (D) won re-election for the third time by 22 points last week. But a new report suggests it was nothing to brag about. He handily won New York City, but struggled in the rest of the state, winning only seven of the counties north of the city. In all, he lost 47 of the Empire State's 62 counties.

Cuomo won Onondaga, Monroe, Albany, Erie, Ulster, and Tompkins Counties, which include major cities like Albany, Buffalo, Rochester, and Syracuse. All the other upstate counties overwhelmingly voted for Cuomo's Republican opponent Marc Molinaro, the Dutchess County executive. In many of those places, he had a 20 to 30 percent lead.

Molinaro challenged Cuomo during their sole debate (Molinaro wanted more) about the convictions of his former aide Joe Percoco and Alain Kaloyeros, the Founding President and Chief Executive Officer of the SUNY Polytechnic Institute who oversaw Cuomo's corrupt Buffalo Billions program. Cuomo, Molinaro said, has presided over “the most corrupted state government in America."

An early squabble came over corruption. Mr. Molinaro alluded to the convictions of Messrs. Percoco and Kaloyeros, and accused the governor of presiding over “the most corrupted state government in America.” Mr. Percoco was found guilty of taking bribes from people seeking state development and energy contracts, and Mr. Kaloyeros was found guilty of rigging the bids on high-tech facilities built by SUNY Poly. (Wall Street Journal)

Cuomo shot back, accusing the Republican of bringing "this extreme conservative, divisive cancer that you have brought to this state with Washington."

Still, a map of New York after the election shows plenty of red spots. As The Democrat & Chronicle noted, Cuomo "has New York City to thank" for his win - again.