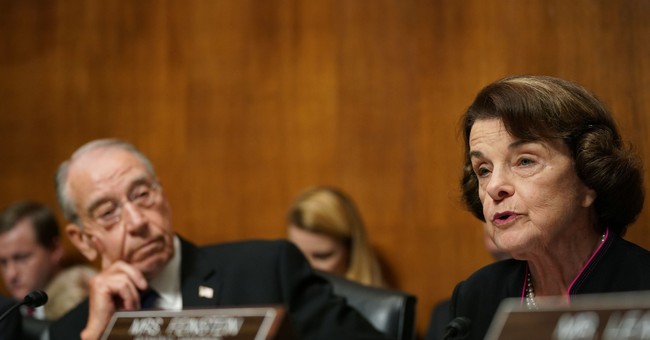 Sen. Tom Cotton (R-AR) told "Face the Nation" host John Dickerson Sunday that the Senate is investigating their colleague Sen. Dianne Feinstein (D-CA) over the letter she received from Judge Kavanaugh's accuser Dr. Christine Blasey Ford. She says the Supreme Court nominee sexually assaulted her in high school. Feinstein got the letter over the summer, but it was leaked to the press just a couple weeks ago, just in time for Kavanaugh's confirmation vote. It was suspicious timing, and Cotton wants to get to the bottom of it.

As soon as Feinstein got Ford's letter, she should have shared it with Judiciary Chairman Chuck Grassley (R-IA), then shown it to the FBI and have them do a quiet investigation. Instead, the letter leaked and breached Ford's anonymity.

"They have betrayed her,” Cotton added. “She has been victimized by Democrats."

So, they are investigating Feinstein and her staff.

Dickerson asked Cotton why women who have been sexually abused would come forward with their stories if, like Dr. Ford, they are not believed by the Senate?

“Any impact that this entire episode has had, on women's willingness to come forward and report sexual assault, which I encourage them all to do immediately after it happens, is caused by the Democrats, is caused by Dianne Feinstein and Chuck Schumer not respecting her requests for confidentiality,“ Cotton said.

Cotton also noted they are investigating Ford's lawyers, who failed to tell their client that the Senate Judiciary Committee offered to meet her in California for a private testimony, so she wouldn't have to face her fear of flying and board a plane to Washington.

At a rally over the weekend, President Trump mocked Feinstein for pretending not to know who leaked the letter.

“Maybe she didn’t, but that was the worst body language I’ve ever seen,” Trump said.

The president again poked fun her at his news conference at the Rose Garden Monday.

"She probably leaked it but who am I to say?"

The FBI is currently investigating the sexual assault allegations against Kavanaugh.