Nobody Noticed, But Netanyahu Made a Huge Charge About Iran Last Week 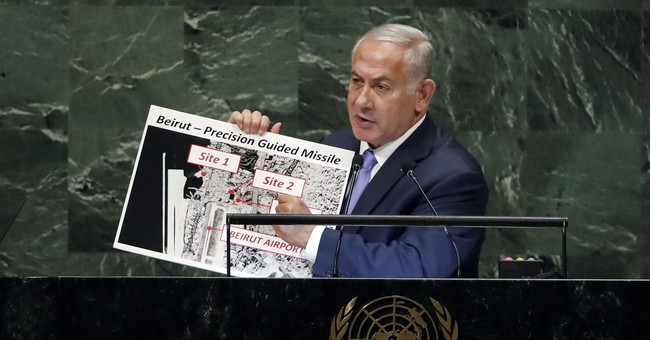 While all eyes were on the Senate Judiciary Committee hearing room last Thursday, a major foreign policy development was occurring at the United Nations. Israeli Prime Minister Benjamin Netanyahu took his turn at the podium at the UN General Assembly, and accused Iran of hiding a "secret atomic warehouse."

"Today, I am disclosing for the first time that Iran has another secret facility in Tehran—a secret atomic warehouse for storing massive amounts of equipment and materiel from Iran’s secret nuclear weapons program," Netanyahu revealed.

He had some photos to prove it.

This is Beirut's airport.

The 1st site is a few blocks from the runway. 2nd site is under a soccer stadium two blocks away. 3rd site is adjacent to the airport. pic.twitter.com/6pev3xEVML

But no worries, according to Netanyahu. "What Iran hides, Israel will find."

Netanyahu usually makes headlines when he speaks at the UN. A few years ago, the Israeli leader stared at his fellow UN members in silence for 45 seconds to shame them for refusing to help thwart a nuclear Iran.

“The response from every one of you here, utter silence," he told his audience. "Deafening silence.”

President Trump, however, agreed that the nuclear deal was a disaster. He pulled the U.S. out of the agreement back in May. He and his administration have condemned former Secretary of State John Kerry for working behind their back and meeting with Zarif to try and save the deal.

"What Kerry did was not only disrespectful, it was hurtful to America," U.S. Ambassador to the UN Nikki Haley declared.