Chris Collins, Who Was Just Indicted, Will Remain on the Ballot in November 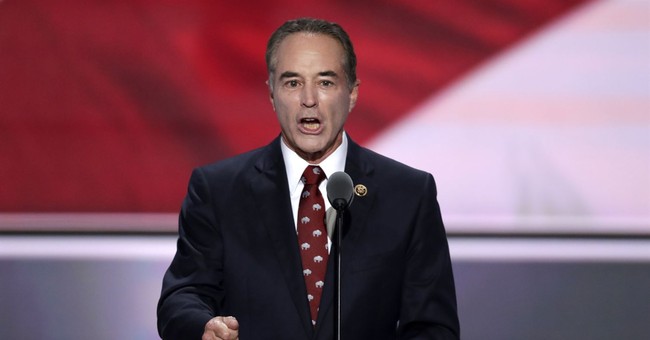 Rep. Chris Collins (R-NY) was indicted on insider trading charges in August. Reports reveal that when Collins was a board member for the pharmaceutical company Innate, he received a devastating email informing him that the company's main drug was a failure. Collins was obligated to keep it a secret. Instead, according to reports,he immediately called his son Cameron with the news, after which Cameron sold his shares, as did a few other relations. By doing so, the family avoided losing over $750,000.

U.S. Attorney Geoffrey Berman outlined the charges in detail at a press conference in Manhattan.

A video from a White House picnic last year, when Collins reportedly received the unfortunate email, shows him grabbing his phone and calling someone. Was it his son?

In his original statement, Collins claimed that the insider trading charges were "meritless."

Despite the scandal, it appears his name will still be on the congressional ballot this November.

The Buffalo News's sources say Republicans feel "blindsided" by the decision. They had an alternative candidate waiting in the wings. It certainly seems to give Collins's Democratic opponent, Grand Island Supervisor Nate McMurray, a head start in the race.

"The choices couldn't be more stark," DNC Chair Tom Perez said Monday. "As much as anything, integrity is on the ballot."