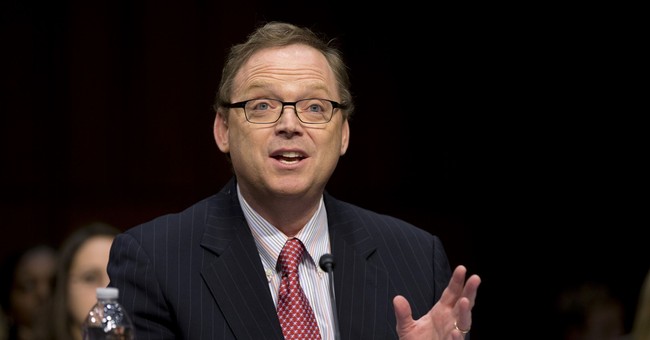 The current economic boom has nothing to do with President Obama, White House economic adviser Kevin Hassett suggested Monday in the briefing room. In a speech last week at the University of Illinois, Obama claimed credit for the improved economic outlook. It was his policies, he noted that paved the way for the current rate.

"Don't forget when the recovery started," he told the audience.

"You don't have to reach far" for an explanation as to why the economy is looking up, Hassett said. Trump deregulated the economy, oversaw massive tax cuts, and cut corporate tax rates, all which have resulted in business returning to the U.S. and creating jobs. He had several charts to prove it.

“I would assert that if you look at the collective body of evidence, the notion that what we’re seeing right now is just a continuation of recent trends is not super defensible,” he said.

Asked again whether Obama deserves any credit for today's economy, Hassett explained that he prefers to give credit or blame based on policy, not individuals. Obama's policies, he said, certainly did not help GDP. The Affordable Care Act, and his increased marginal tax rates on small businesses, for instance, "did not help" growth. "I wonder what was going on in the heads" of Obama's economists, like Cash for Clunkers, he added.

On the other hand, the 2008 recession was "not Obama's fault," Hassett conceded.

One reporter wanted to know if it was a coincidence that Hassett showed up at the briefing just a few days after Obama's speech. Hassett thanked her for the question, noting he was not there just to debunk Obama. He had "wanted to show these slides for quite awhile."