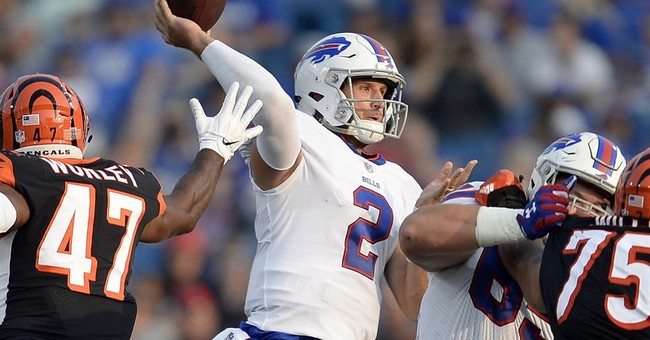 Timothy McVeigh blew up an Oklahoma City federal office building and killed almost 200 innocent people in 1995. He was executed in 2001. Politico writer Sam Anderson believes McVeigh planned the bombing, one of the deadliest acts of domestic terrorism in U.S. history, in part because...football.

The Buffalo Bills infamously went 0-4 in four consecutive Super Bowls in the 1990s. The first two losses upset McVeigh, a native Western New Yorker, Anderson writes. But, it was the third loss that really devastated him, because he had bet on the team winning. He had just returned from his military service in the Persian Gulf War and had suffered a nervous breakdown. He was short on money and bet everything he had on a Bills victory in Super Bowl XXVII.

Anderson insists he is not arguing the unimaginable.

I am not saying that Timothy McVeigh bombed Oklahoma City in 1995 because the Buffalo Bills lost four Super Bowls in a row. (They made it back in 1994 and—incredibly—lost that one too, cementing their reputation as the greatest losers in NFL history.) Such a claim would be absurd. Human motives are incalculably complex. But that Buffalo heartbreak was one of the many shadows that fell across McVeigh’s life between his unstable childhood and his perpetration of mass murder in Oklahoma City. (Politico)

But, Anderson goes on to note that the Bills' defeats did no favors for McVeigh's mental health.

The almost unbelievable failure of the Bills, and the civic pain it caused, amplified his native pain. After McVeigh returned from the Gulf War, his Bills fandom was one of the few positive social networks he was able to plug back into, one of the most powerful, stable, visceral communities to which he unquestionably belonged. Its failure was devastating, to him and to everyone else in the area. To this day, even well-adjusted Buffalonians walk around imagining alternate lives in which their team actually won four Super Bowls in a row, becoming arguably the greatest team in NFL history, putting the city on the map in a way it otherwise never could have dreamed of.

Or at least won one Super Bowl, securing a happy little foothold in history. Instead, that 1990s Bills team is remembered as a tragic joke. It’s easy to pretend that sports doesn’t matter in real life, but for many millions of people, it does. It matters profoundly, every day.

McVeigh was born in my hometown of Lockport, NY. All of us upstate New Yorkers were upset by the Bills' stunning losing record. However, McVeigh, who joined a religious cult called the Branch Davidians, had radical views that fueled his hate for the government and drove him to blow up a building. You can hardly blame that on a football team.