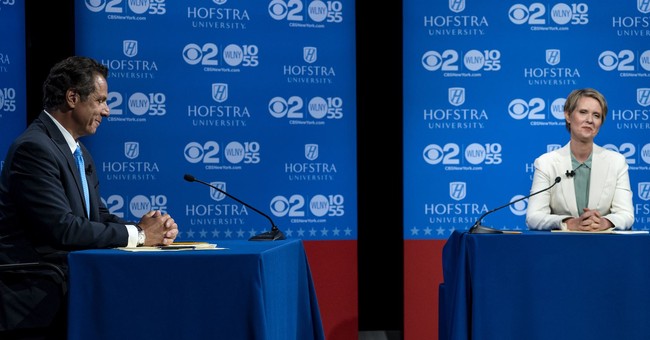 The state runs the MTA. @NYGovCuomo knows this. I know he’s really bad at it — every New Yorker does — but he can’t just pretend it’s not his fault because it’s election time.

As expected, the New York Democratic primary debate between Gov. Andrew Cuomo and Cynthia Nixon on Wednesday was a scorcher. The two battled over everything from health care and public unions, to the state of the New York subway system.

That last topic produced some heated exchanges like this:

“Can you stop interrupting,” Cuomo asked.

“Can you stop lying,” Nixon responded.

“Talk about so many lies,” Nixon repeated.

At one point, Cuomo suggested that Nixon lived in a world of “fiction rather than facts.” While she has a history of advocating on behalf of progressive issues, the governor has enacted real change, he said.

“The government is not about politics, it’s not about advocacy; it’s about doing," Cuomo said. "It’s about management. This is real life."

“Experience doesn’t mean that much if you’re not actually good at governing,” Nixon quipped.

The former "Sex and the City" actress also called Cuomo "corrupt" on occasion.

Recommended
CBS Is Not 'Going Rogue' on Jan. 6
Tim Graham

Apparently the sparks were flying online as well, with Cuomo's team mocking Nixon on Twitter.

This will be the only debate between Cuomo and Nixon. The gubernatorial primary will be held Sept. 13.