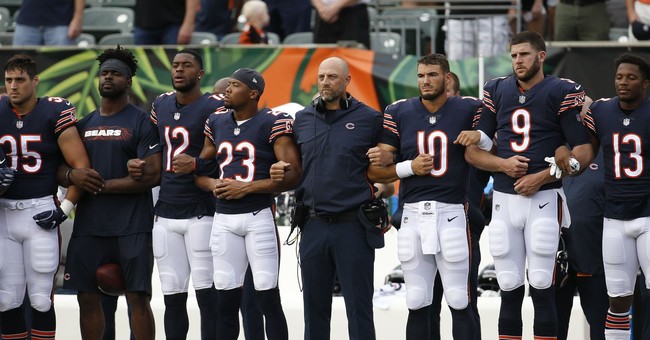 On Thursday, the start of preseason football, some NFL players, including a couple Miami Dolphins, decided to kneel during the playing of the national anthem to protest social injustice, resurrecting a controversy that has caused headaches for the league. President Trump, who has sparred with the players in the past two years over the protests, weighed in early Friday morning. He told them to show some respect, or risk suspension.

The NFL players are at it again - taking a knee when they should be standing proudly for the National Anthem. Numerous players, from different teams, wanted to show their “outrage” at something that most of them are unable to define. They make a fortune doing what they love......

.....Be happy, be cool! A football game, that fans are paying soooo much money to watch and enjoy, is no place to protest. Most of that money goes to the players anyway. Find another way to protest. Stand proudly for your National Anthem or be Suspended Without Pay!

Earlier this year, the NFL finally released a new policy instructing teams how to behave during the playing of the anthem. Commissioner Roger Goodell noted that players who are on the field are required to stand and show respect for the flag during the anthem. If they can't do that, they have the option to remain in the locker room. Kneeling, however, was not an option.

The controversy began with San Francisco 49er Colin Kaepernick, who knelt during a playing of the national anthem at a game in the summer of 2016. Several other players followed suit, despite getting booed. Trump weighed in by calling those protesting players SOBs, after which even more players joined in the protest. Fans were fed up and it reflected in the NFL's ratings.