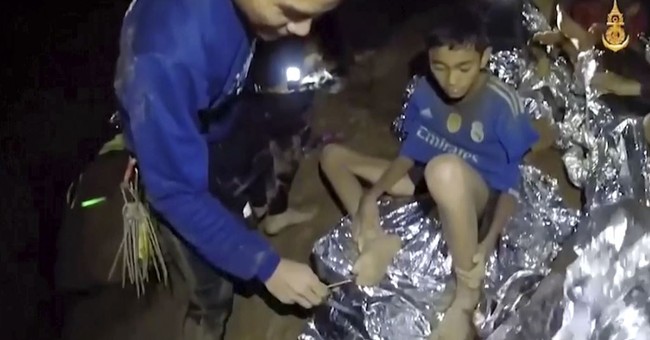 The world celebrated a miracle this week when rescue workers found the members of a Thai youth soccer team that had been trapped in a flooded cave for 11 days. The euphoria was short lived, however, once they realized the team still had a major obstacle to overcome. The boys either have to scuba dive to safety, or wait months for the water level to recede. The monsoon season is expected to last three or four months. The scuba diving seems like the more pressing option, but none of the boys know how to swim. What's worse, the narrow and jagged passages en route to safety could be life-threatening, according to experts, and this week's ominous weather forecast does not help.

With these factors in mind, Thai Navy SEALs are now rushing to teach the adolescents how to properly dive.

With heavy rains forecast, Thai Navy SEALs are scrambling to teach the youngsters scuba diving techniques before the flooding inside the six-mile-long Tham Luang Cave worsens. None of the children know how to swim. Interior Minister Anupong Paojinda told reporters Tuesday that rising water levels will make it harder to keep the boys and their 25-year-old coach supplied with the food, water and medicine to recover from their 10 days and counting underground. (Wall Street Journal)

It is a terrifying and traumatic situation. But Stacy Kaiser, a family and child counselor, told CNN Wednesday that there's reason to hope.

"Believing they'll be rescued is helping them," she said of the soccer players.

The boys and their coach got trapped in a flash flood while they were participating in an initiation ritual on June 23 where they each carve their name on the cave wall.

The Thai Navy SEALs shared a video of the players in the cave. They appeared to be in good spirits.

We'll be sending our thoughts and prayers to these brave boys.