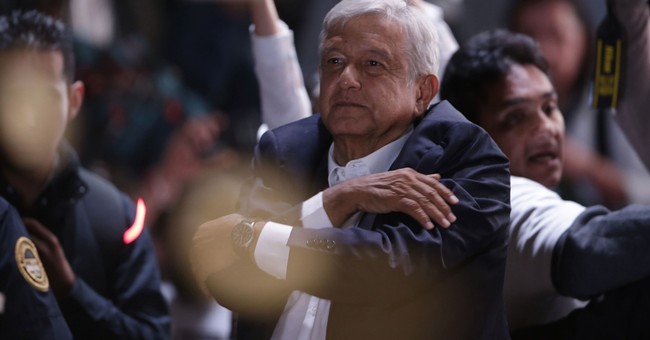 The 64-year-old pulled off the victory however, in part by railing against the U.S. president's policies.

In particular, Obrador has had plenty to say about Trump's proposed border wall at the U.S.-Mexico border. He wrote a whole book about it, which he titled, "Oye, Trump," or, "Listen Trump." The book condemns Trump’s plans to build a border wall and “his attempts to persecute migrant workers." The author accuses Trump as stoking racism and "hispanophobia" in the U.S, according to the description on Amazon. He condemns the "propaganda attacks" against migrants.

The border wall also affected Trump's relationship with current President Enrique Peña Nieto. The Mexican president had plans to visit the U.S. last year. But when Trump signed an executive order allowing construction of the wall and started tweeting that Mexico was going to pay for it, Nieto informed him he was canceling his trip.

Yet, despite Obrador's criticisms, the media has noticed similarities between the two men. Like Trump, Obrador has often painted himself as an outsider. His "nationalism, stubborn nature and put-downs of rivals have drawn comparisons" to the U.S. president, Reuters notes.

Obrador won this weekend's elections by also pledging to cut corruption and tackle the murder rate, which has soared under President Nieto. Obrador will assume power on December 1.

It Sure Looks Like CBS News Edited Body Cam Footage to Omit a Key Frame in Adam Toledo Shooting
Townhall
'Journalism...ish': The Oregonian deletes 'poorly worded' tweet on the police-involved shooting of a 'white male in his 30s' in Portland park
Twitchy
The Biden Administration Seeks Revenge on the Man Who Exposed the Trump-Russia Hoax
Redstate
The New World Order Is Taking Its Mask Off While Telling You to Keep Yours On
PJ Media