ICE Chief: Where's the Outrage for the 'Angel Families?' 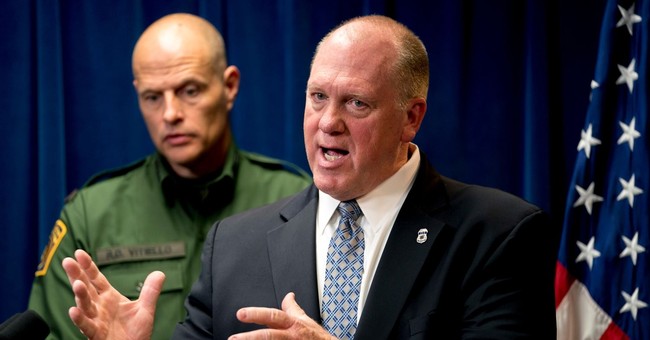 Immigration and Customs Enforcement Acting Director Thomas Homan, who is retiring, has been "sickened" over the verbal attacks on his officers in recent months. Communities are terminating contracts with the immigration agency, while some Democratic lawmakers are calling for the department to be completely abolished.

These are the men and women "who run toward danger when everyone else runs away," a frustrated Homan said on "Fox and Friends" Friday morning. Law enforcement should be celebrated, not "vilified."

He's not throwing the border patrol "under the bus," he said, suggesting that the separation policy is sound policy. He's just trying to defend his guys.

Congress failed to fix the border issue, Homan said, despite ICE warning them about the loopholes. So, they had to step in. Homan was visibly annoyed and sighed aloud when he tried to explain that ICE is simply doing their jobs and enforcing the laws that lawmakers enacted. Furthermore, how can lawmakers vilify ICE when they support dangerous sanctuary city policies? Homan wondered. Take Sen. Kirsten Gillibrand (D-NY), for instance. She supports sanctuary city status, which allows illegal immigrants to hide in her city, which results in ICE having to capture thousands in the streets.

He posed another question. Why are these critics attacking ICE, when they should be stoking outrage against the real criminals who have literally torn families apart?

Acting @ICEgov Dir. Tom Homan: "I wish there was this much outrage about Angel Moms that their children were killed by illegal aliens & they're separated forever. I didn't hear any outrage from these Congressmen. But when we start separating illegal aliens, there's an outrage." pic.twitter.com/R4rgW6gmG8

Before one more critic opens his or her mouth against ICE, Homan dared them to go stand on the front lines with a gun on their hip and try to do their job.

With all the attacks against ICE, Homan leaves his post with "mixed emotions."