Trump Thanks Kennedy for His Trust at North Dakota Rally 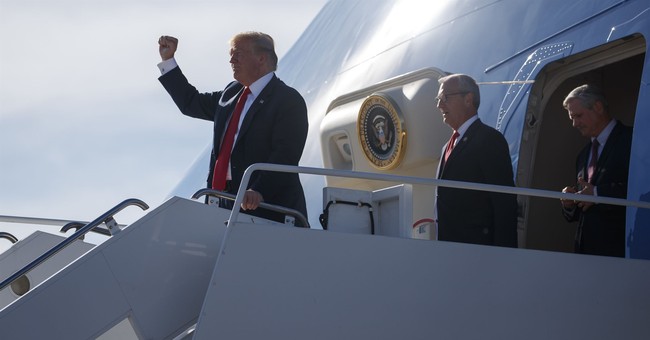 President Trump held a "Make America Great Again" rally in Fargo, North Dakota Wednesday to cap off a very busy news day. Supreme Court Justice Anthony Kennedy announced he is retiring at the end of next month, offering the president a second opportunity to nominate someone for the high court. The president thanked Kennedy for his years of fair play on the bench and for trusting him to pick a worthy replacement.

President @realDonaldTrump on Justice Kennedy retiring: "I'm very honored that he chose to do it during my term in office, because he felt confident in me to make the right choice and carry on his great legacy." pic.twitter.com/iVGOBGXWwg

Trump noted how important it is to confirm judges who uphold the Constitution, especially in light of the Supreme Court's pro-travel ban ruling.

The president is on the ground in North Dakota to support Republican Rep. Kevin Cramer in his bid to unseat Sen. Heidi Heitkamp (D). Heitkamp is extremely vulnerable, having to campaign in a state Trump won by double digits in the 2016 election.

Knowing trade has been a big issue for the state, Trump made sure to note how his trade policies, such as placing tariffs on steel and aluminum, have positively affected workers.

"Do you see what's happening with our steel industry in the last four months?" he asked the crowd. "It's booming again folks, it's booming."

U.S. steel is opening six plants and looking to hire, he shared. One company in South Carolina called Georgetown is hiring 600 people alone.

The president mocked Democrats at one point for suggesting a "blue wave" is on the horizon.

They "keep talking about this blue wave," he said. "Their blue wave is really sputtering pretty badly."

Keeping the Senate in the GOP's hands is "the most important thing" in light of Justice Kennedy's exit, Trump noted.