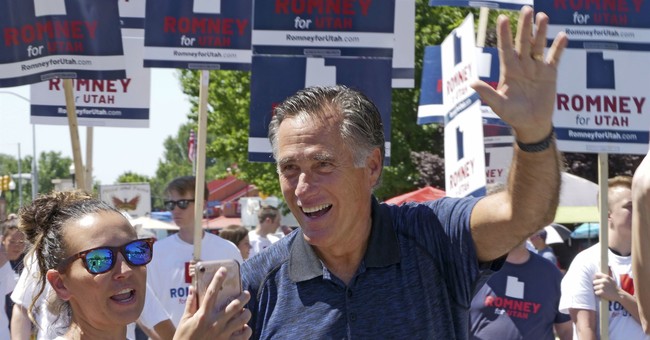 Utah Senate candidate Mitt Romney used to be one of Donald Trump's biggest critics. During the 2016 presidential campaign he referred to Trump as a con man and a phony. A year later, he was at least friendly with president-elect Trump, even meeting with him as he was considered for a cabinet position. As a Utah Senate candidate, Romney is still speaking out against President Trump's rhetoric and a few of his policies, showing voters that he's not a yes man and will distance himself from the commander in chief when he needs to, most recently on the administration's policies that led to the separation of families at the border. Trump's zero tolerance policy, he said, was "just wrong."

He wrote an op-ed about why he's continued to speak up.

I have and will continue to speak out when the president says or does something which is divisive, racist, sexist, anti-immigrant, dishonest or destructive to democratic institutions. I do not make this a daily commentary; I express contrary views only when I believe it is a matter of substantial significance.

People ask me why I feel compelled to express my disagreements with the president. I believe that when you are known as a member of a “team,” and the captain says or does something you feel is morally wrong, if you stay silent you tacitly assent to the captain’s posture. (The Salt Lake Tribune)

He went on to quote Dr. Martin Luther King, Jr.

As we've seen from other races, though, GOP critics of Trump have not exactly found resounding success. Bob Corker (TN) and Jeff Flake (AZ) are retiring after months of butting heads with the White House, and Sen. Mark Sanford, who has blasted Trump's border wall and proposed tariffs, just got defeated in the South Carolina primary. Will Romney share the same fate for not being in lock step with the president?

CNN followed Romney on the campaign trail this week and captured the moment a voter handed the candidate "re-elect Trump" buttons.

"You can give them to me," he told the voter, laughing. "But I'm not going to put them on because I haven't decided who I'm going to support yet. That's a little early."

Dana Bash asked Romney about his "complex approach" to his campaign when it comes to President Trump. Who will voters see on the campaign trail, she wondered. The Never Trump Romney or the one who almost served in his cabinet? He responded by reiterating the sentiments he jotted down in his op-ed.

"I think I've made it pretty clear," Romney told Bash. "I'll stand with President Trump if the policies he's proposing are good for the state of Utah, for other states, for the nation. On the other hand, if he were to say something that is divisive, and significant, something which were racist, or anti-woman, or anti-immigrant, then I feel a moral responsibility to speak out."

CNN anchor John Berman noted that in his op-ed, Romney didn't say he'll speak out if Trump says racist things, but when.

The Utah primary is Tuesday night.