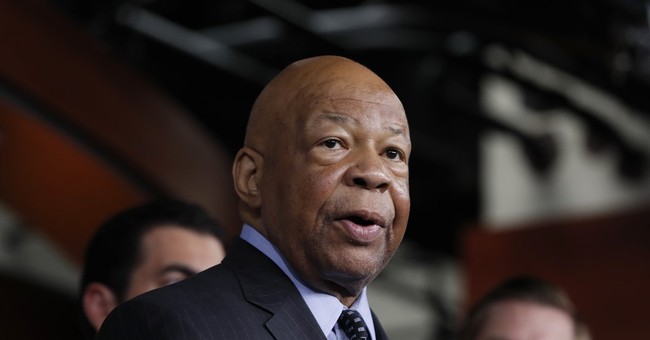 Congress met today to further discuss the DOJ's Inspector General report on the FBI's investigation into Hillary Clinton's emails. DOJ IG Michael Horowitz is appearing before a joint session of the House Judiciary and House Oversight Committees on Tuesday, after appearing before the Senate Judiciary Committee a day earlier. Rep. Elijah Cummings (D-MD), however, used his opening remarks to sound off on the White House's zero tolerance policy at the border. Like many critics, he is horrified that the Trump administration is supposedly ripping children from their parents as families try to illegally cross the border. The White House has explained that they hate the process of separating families, but they are trying to enforce the law.

Still, Cummings implored the witnesses at today's hearing to stand up to Trump and fight back against the policy. With the zero tolerance policy, President Trump has introduced "child internment camps" into this country, Cummings alleged.

Rep. Cummings emotionally condemns policy of separating families at border: "We all should be able to agree that in the United States of America, we will not intentionally separate children from their parents. We will not do that, we are better than that. We are so much better." pic.twitter.com/SXedRGEszF

"We all should be able to agree that in the United States of America, we will not intentionally separate children from their parents," he said. "We will not do that, we are better than that. We are so much better."

Cummings then directed his pleas to his Republican colleagues, imploring them to stand up to Trump's "mean" policy.

“We need you," he said, fighting back tears. "Those children need you. I’m talking directly to my Republican colleagues. We need you to stand up to President Trump."

Cummings did briefly address the IG report too, suggesting that Republicans only see Clinton as guilty.

"At this point I think it's crystal clear that the only answer Republicans will accept is that Hillary must be guilty."