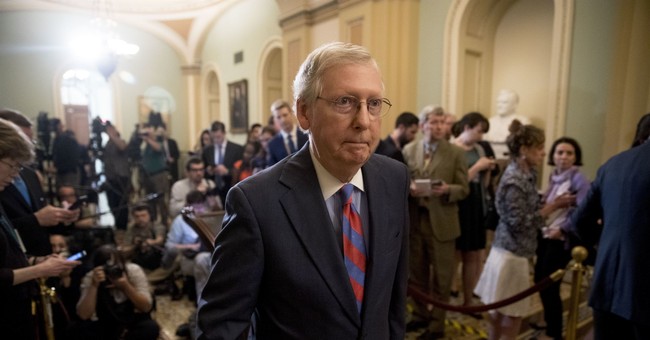 Senate Majority Leader Mitch McConnell has canceled the August recess. There's just too much work to do, he told his colleagues. They need to make headway on both legislation on key congressional races ahead of the midterms.

My statement on cancelling the August recess: pic.twitter.com/yyAEUSMVQW

As you can see, McConnell blamed part of the congressional inaction on Democratic obstruction. For instance, Democratic senators' refusal to hand in their blue slips has stalled several of Trump's judicial nominees.

The Senate can’t walk and chew gum at the same time," Lankford said. "So, if you’ve got post-cloture time pending on a nominee, you can’t get on appropriations bills, you can’t get on legislation. Even things that are on the hotline right now — that should be able to come out and have a straight floor vote — you can’t get out."

Before McConnell made it official, Sen. Orrin Hatch (R-UT) weighed in on the Republicans' "nefarious plot."

They’re on to us.

“Senate Republicans cancelling recess to stay in Washington and do their jobs” is quite the nefarious plot. https://t.co/VBWDvkUs6p

The conservative group Tea Party Patriots commended the Senate leader for his decision.

“Thank you, Senator McConnell—your decision to cancel most of the August recess is a step in the right direction," Tea Party Patriots Citizens Fund Chairman Jenny Beth Martin said in a statement. "We cannot continue to allow Congress to wait until our government is nearing another shutdown to present a 2,000 page bill and then give lawmakers a ‘choice' of shutting down the government or passing a bill no one has read. That pattern has only led to irresponsible lawmaking—passing $2 trillion bills that no one has time to fully comprehend.

"With Democrats abusing the rules of the Senate to force virtually every single one of President Trump’s nominees into 30 hours of debate before getting a vote, we need our senators present in the Capitol. To prove that you are serious about stopping the Democrats’ obstruction and getting the peoples’ work done properly, you should also keep the Senate in Washington, DC through this weekend to vote on the president’s nominees, and start working full five-day workweeks, as most workers in America do.”