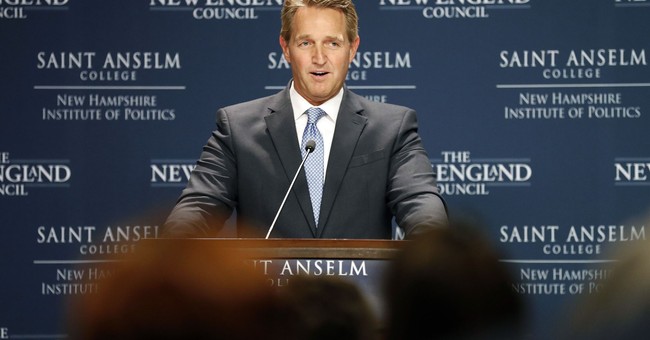 Outgoing Sen. Jeff Flake (R-AZ) has never stifled his distaste for President Trump. He is bitter toward how the president has affected conservatism, he told us in a book, and he believes that the president's rhetoric is comparable to Joseph Stalin's, he said on the Senate floor. On Wednesday, the senator told a group of Harvard Law graduates that Trump has even "debased" the presidency and undermined the Constitution.

The presidency has been "debased" by a "figure who seemingly has a bottomless appetite for destruction and division, and only a passing familiarity with how the Constitution works," Flake said. It's time for people to stop equating being "cruel" with making "America great," he said, adding, "to be clear, we did not become great – and will never be great — by indulging and encouraging our very worst impulses. It doesn't matter how many red caps you sell." (The Week)

The United States, he said, "may have hit rock bottom."

"If you have been wondering what the bottom looks like, this is what it looks like when you stress-test all of the institutions that undergird our constitutional democracy at the same time."

The senator defended his remarks in a CNN interview, telling Wolf Blitzer he was simply defending the U.S.'s "constitutional prerogative."

This is the third time Flake has so publicly condemned (without naming) the 45th president. The first time he wrote down his frustration in a book called Conscience of a Conservative: A Rejection of Destructive Politics and a Return to Principle, blaming Trump for causing conservatives to compromise their principles. He then berated Trump on the Senate floor, comparing the president's fiery rhetoric to that of Soviet dictator Joseph Stalin.

In his Harvard address, Flake said, "its time for the Congress to stand up." That Capitol Hill crusade does not appear to include him, though, since he announced last year that he is retiring from Congress at the end of this term.

He may, however, have his eyes on higher office.