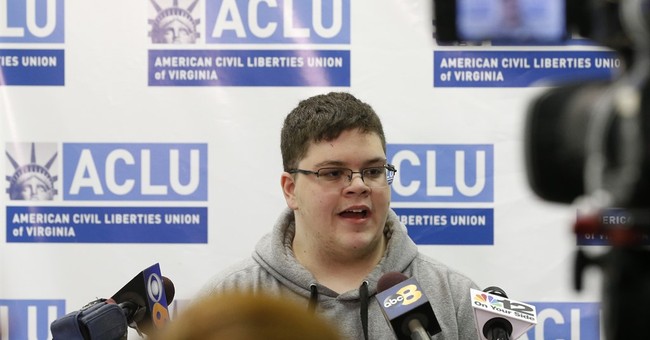 Gavin Grimm, a transgender teenager who sued his school for not letting him use the boys' bathroom, has won his case against his old school board. At this point, it is more of a symbolic victory, since he graduated almost a year ago.

The Gloucester School Board voted on a policy in December 2014 that required Grimm to use the restroom that corresponded with his birth certificate. After that decision, Grimm said he felt isolated. U.S. District Judge Arenda L. Wright Allen ruled Tuesday that Grimm was in his rights to sue the school and to use the bathroom of his choice.

"The Board's argument that the policy did not discriminate against any one class of students is resoundingly unpersuasive," Allen wrote in her order.

"After fighting this policy since I was 15 years old, I finally have a court decision saying that what the Gloucester County School Board did to me was wrong and it was against the law," he said in a statement released by the ACLU of Virginia, which has represented Grimm in the lawsuit. "I was determined not to give up because I didn't want any other student to have to suffer the same experience that I had to go through."

The judge ordered that attorneys for both parties contact the court within 30 days to schedule a settlement conference to resolve the issue. The final outcome is expected to come from higher courts.

The rights of transgender students became a national issue two years ago when President Obama's Department of Education mandated that public schools would have to allow students to use whichever bathroom corresponds with their gender identity, as opposed to their birth certificate. Family groups warned that the directive would be dangerous for children. President Trump reversed the order last year.