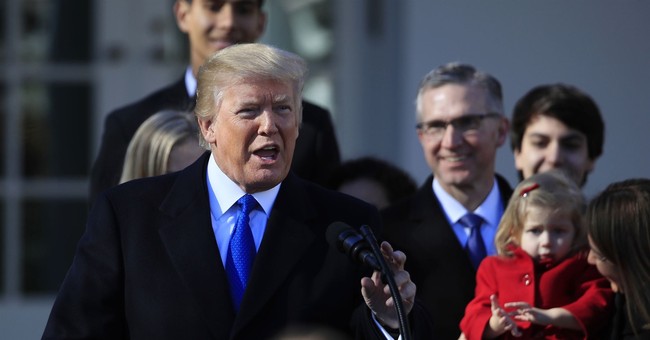 Forty-two percent of Americans, a plurality in a new CBS poll, feel optimistic about the future of the economy. Only 33 percent are pessimistic, and it's thanks to President Trump's policies, the respondents noted.

Sixty-eight percent of those surveyed answered that Trump's policies are responsible for the improving economy - 35 percent of whom said his policies had a "great deal" to do with it.

Tax reform was likely a big driver of Americans' optimism. In February, a poll from The New York Times and SurveyMonkey found that a majority (51 percent) had a favorable view of the Republican effort. The legislation, which received zero Democratic votes, resulted in major companies offering thousands of dollars in bonuses to their employees. Top Democratic leaders like Nancy Pelosi stuck their foot in their mouths by dismissing these perks as "crumbs."

In terms of foreign policy, Americans were unsure at best about Trump's diplomatic efforts with North Korea. Forty-seven percent said it was "too soon to say" whether the planned Kim Jong Un-Trump summit in Singapore would result in denuclearization.

Republicans would be wise to mention tax reform often in their talking points as we head toward the midterm elections.