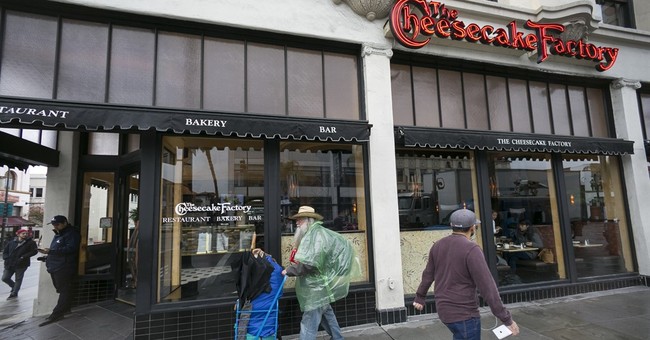 Cheesecake Factory customer Eugenior Joseph made the mistake of wearing a "Make America Great Again" hat last weekend in one of the company's Miami locations. The 22-year-old Trump supporter went out for a nice meal, and instead got humiliated.

According to multiple witnesses and Joseph's own account, a woman who worked at the restaurant walked up to him and started pointing at his hat, signaling for the other employees to come over.

"Her finger was literally on top of his head, we were all looking at her like 'what is happening?'" one witness told The Daily Wire. "She was pointing at him, calling her other coworkers, telling them to look at this guy wearing a Make America Great Again hat."

At that point, approximately a dozen or so employees approached the table and began making comments about the hat, with some saying they wanted to punch Joseph in the face. Witnesses also allege that some of the employees also referred to him as a "n**ger" in their conversations among each other.

Other staff booed him, while others balled their fists at him to intimidate him, according to Joseph. He reacted to the unfortunate exchange on Fox News.

Eugenior Joseph, berated at Cheesecake Factory over MAGA hat: “This is America, everyone should be entitled to their own opinions, own beliefs.” https://t.co/IpM7tQhS4n pic.twitter.com/vo5kZdaP43

"Nobody should be disrespected or treated the way I was treated," he added.

Since the incident, the Cheesecake Factory issued an apology and noted that two employees at the Miami restaurant have been dismissed for their behavior.

All guests should always feel welcome in our restaurants. The recent incident in one of our Miami restaurants fell short of our standards, and we apologize to the guest and his family. Two individuals are no longer employed by the company, and we are continuing to investigate. pic.twitter.com/gbrh1Ok8iC

Good. Customers should be able to eat their cheesecake in peace, regardless of their political apparel.