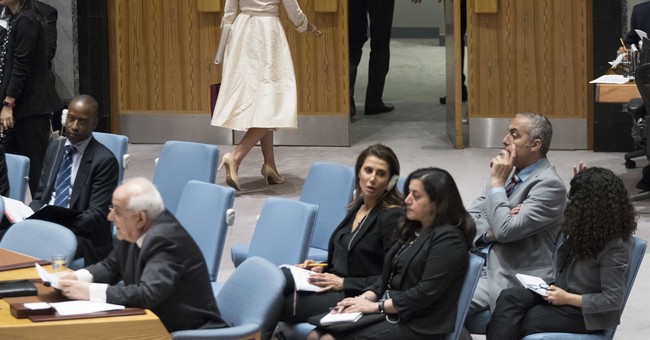 U.S. ambassador to the United Nations Nikki Haley made quite the statement on the Middle East at Tuesday's Security Council meeting - and it had nothing to do with her speech. After the ambassador had finished condemning Hamas for the violence on the Gaza-Israel border this week and Palestinian Ambassador Riyad H. Mansour instead began condemning Israeli forces, she got up and left.

Nikki Haley walking out as Palestine's envoy to the UN begins to speak pretty much summarizes the US stance towards the Palestinians. pic.twitter.com/3GJJM48ewK

Half of Twitter loved her symbolic exit. The other half decried it as shameful and undiplomatic.

Violence erupted in Gaza this week as the new U.S. embassy in Israel opened in Jerusalem. Several top U.S. officials were there for the ceremony, including Ivanka Trump and Jared Kushner. President Trump recorded a video address for the occasion, reiterating the U.S.'s hope for peace in the region. In his own remarks, Israeli Prime Minister Benjamin Netanyahu thanked Trump for his courage and his friendship.

Thousands of Palestinians, however, responded by rioting near the Gaza border, some armed with firebombs and other explosive devices. Israeli Defense Forces, who had warned the Palestinians not to approach the border, killed over 50 of those individuals and wounded over 2,000 others. A group of U.S. Democratic lawmakers and nations like France responded by demanding Israel show more restraint. In his UN remarks, the Palestinian ambassador said "Israel occupation forces" were to blame for the "massacre" at the border. Haley disagreed with all of them, noting that Israel showed just the right amount of restraint.

"No country in this chamber would act with more restraint than Israel has," Haley said at the Security Council meeting. "In fact, the record of several countries here today suggest that they would be less restrained."

Who can blame Israel for simply wanting to defend itself?

RT @USUN: “I ask my colleagues here in the Security Council, who among us would accept this type of activity on your border? No one would.” pic.twitter.com/gh0ukdqCCp

Reports indicate that the terror group Hamas had orchestrated the riots near the border. She placed the blame squarely on their shoulders.

"Let's remember that the Hamas terrorist organization has been inciting violence for years, long before the United States decided to move our embassy,” she said. “This is what is endangering the people of Gaza. Make no mistake, Hamas is pleased with the results from yesterday.”

Israel is so moved by the Trump administration's kept embassy promise that they gifted Haley a rare artifact this week - an ancient coin from the Great Revolt of 68 CE, as reported by The Jerusalem Post. On the coin can be read the words, "Freedom of Zion" and "Year Two of the Revolt," in reference to the Jewish revolt 2,000 years ago against the Romans.