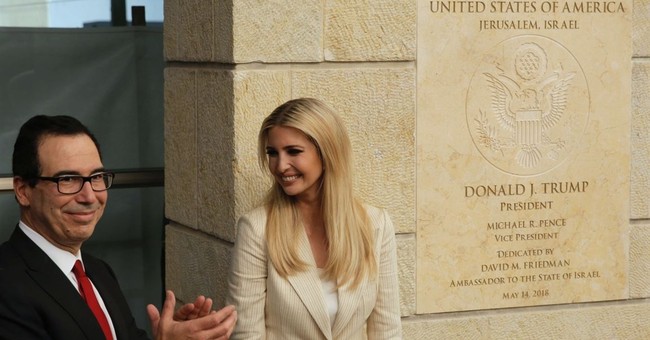 The New York Daily News is known for being a bit tabloidy and not exactly a bastion of hard hitting news, but their latest headline is just shameful. Who let this go to print?

The nasty headline leaves out that Hamas helped orchestrate Monday's violent protests. The rioters stormed the Gaza-Israeli border, despite being warned, with firebombs and other explosive devices, so IDF confronted them with force of their own. Over 50 individuals were killed and over 2,000 injured in the exchange. Reports reveal that 10 of those killed were members of Hamas's internal security apparatus. The White House defended Israel's right to protect itself from terror activity.

That didn't stop nations like France and a group of U.S. Democratic lawmakers from condemning Israeli forces for confronting the Palestinian rioters, demanding they exercise more discretion.

Moving the embassy to Jerusalem is not a new concept. Congress passed the Jerusalem Embassy Act back in 1995, during Bill Clinton's presidency. Clinton and his successors tried to enforce it, but not until Trump was the move actually enforced. The president could not attend, so Ivanka and her husband Jared, who are Jewish, made the trip to, yes, celebrate the move and declare that Jerusalem is the rightful capital of Israel.

For the New York Daily News to blame Ivanka for the violence is "repulsive" and "sick," according to some pundits.

The NY Daily News is right to use the word "Deplorable" in a tweet about their Tuesday cover.

Even if you hate Trump, you can not blame Ivanka for smiling at the opening of an embassy because idiots in Hamas are out killing Israelis.

Repulsive by NYDN to frame it that way. https://t.co/GCrhx1m0GO

The NY Daily News used to be a major newspaper, but went totally broke in recent years, lost almost all of its circulation and is now just a crazy, desperate for attention, fake news, National Enquirer-ish, hate filled tabloid. Look at today's sick headline: pic.twitter.com/WKqAu54jy9

Despite the New York Daily News's narrative, Ivanka was not the only one celebrating the embassy move Monday. Israeli Prime Minister Benjamin Netanyahu and Israeli officials are thanking the Trump administration for making good on their promise.