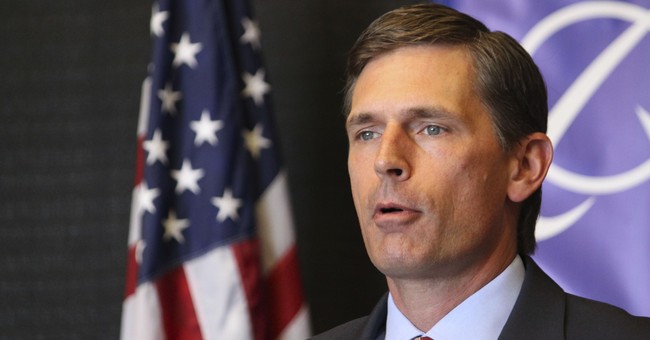 As reported earlier, CIA Director nominee Gina Haspel was grilled at her confirmation hearing about the agency's decision to dispose of interrogation videotapes dating back to 2002. Haspel explained to several senators that the agency decided to destroy the tapes because they posed real threats to the CIA officers who appeared in the videos.

Sen. Martin Heinrich (D-NM) was still not satisfied. He proceeded to offer her a scenario that could have prevented this whole controversy. By the way he phrased it, it was obvious.

"Why couldn't the agency have simply digitized that video and then blacked out the faces of any agents in those videos?" he asked.

"This was at a time when the entire program was the subject of unauthorized leaks and someone was found guilty of those unauthorized leaks so the concern was an irresponsible leak of our officers' faces to the world, not an official release," Haspel explained.

That's when Heinrich proceeded to "mansplain."

Sen. Heinrich: "No, I understand that, but if you would have blacked out the agents' faces, destroyed the videotapes and kept a digital record that would have addressed those security concerns."

Haspel: "Senator, I’m just not a technical person so -"

Sen. Heinrich: "It's not that complicated."

Who knew Heinrich was an expert on IT and national security.

Haspel fielded other antagonistic retorts throughout the hearing - a few of which she was ready for. Sen. Ron Wyden (D-OR), for instance, suggested that her record is largely classified in order to put her in a better light. What was she hiding?

She defended her integrity when Sen. Mark Warner (D-VA) grilled her about what she would do if President Trump directed her to restart enhanced interrogation.

"My parents gave me a very strong moral compass," she said. "I would never, ever take CIA back to an interrogation program.”

At another point, Haspel corrected Sen. Dianne Feinstein (D-CA) for suggesting the CIA had interrogated 92 detainees. It was 92 tapes of one detainee, Haspel responded.

The FBI Lied to a Judge So They Could Bust Open Thousands of Safety Deposit Boxes
Townhall
Tammy Bruce & Joe Concha share some ratings info about Chris Wallace's premiere show on CNN (Hint: 'OUCH')
Twitchy
Woman's Disturbing Reaction to Man Calling Her out for Wrongdoing Shows an Infantilization of Society
Redstate
Now the Commies Want to Abolish Your Kitchen
PJ Media