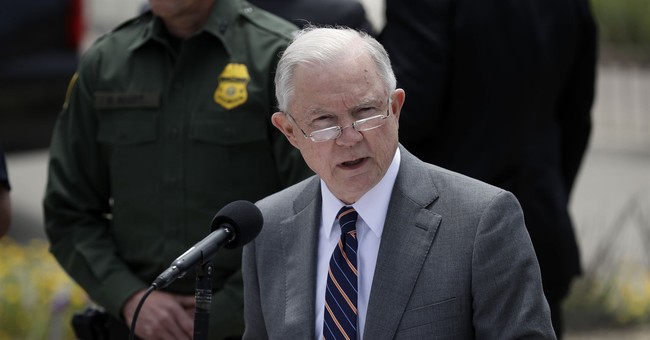 "If you cross the border unlawfully, then we will prosecute you," Attorney General Jeff Sessions said at a news conference in Scottsdale, Arizona Monday. "It's that simple"

The administration has "zero tolerance" for lawbreakers at the border. What that means is that families may be separated while border agents question individuals trying to enter the country.

"We don't want to separate families, but we don't want families to come to the border illegally and attempt to enter into this country improperly," Sessions said. "The parents are subject to prosecution while children may not be. So, if we do our duty and prosecute those cases, then children inevitably for a period of time might be in different conditions."

For children who are separated from their parents, they would be placed in the care of the Health and Human Services Department, he went on to explain.

"If you don't like that, then don't smuggle children over our border," he added.

Hecklers in attendance shouted down Sessions for his supposedly heartless policy. Also, groups like Amnesty International and Democratic lawmakers wondered if the zero tolerance treatment will be applied to families who are simply trying to seek asylum.

"Criminalizing and stigmatizing parents who are only trying to keep their children from harm and give them a safe upbringing will cause untold damage to thousands of traumatized families who have already given up everything to flee terrible circumstances in their home countries," said Erika Guevara-Rosas, Amnesty International's Americas director.

U.S. Rep. Bennie Thompson of Mississippi, the top Democrat on the House Homeland Security Committee, said, "Criminalizing parents seeking protection for themselves and their children is inhumane, excessively punitive, and can deliberately interfere with their ability to seek asylum."

Yet, ICE Acting Director Thomas Homan stood by the AG.

"Every law enforcement agency in this country separates parents from children when they're arrested for a crime," Homan said. "There is no new policy. This has always been the policy. Now, you will see more prosecutions because of the attorney general's commitment to zero tolerance."

Over 700 children have been separated from their parents since last October, according to the Department of Homeland Security.

Sessions and the Trump administration at large have taken a bold approach in cracking down on illegal immigration. Under their leadership, ICE has conducted several raids across the country to find and capture illegal immigrants and have issued warnings to sanctuary cities. Of course, Trump and Sessions have faced resistance from liberal leaders from New York to California, who believe their jurisdictions' sanctuary statuses are heroic and humane.