Melania's Approval Rating Is Starting to Soar...Media Surmise Why 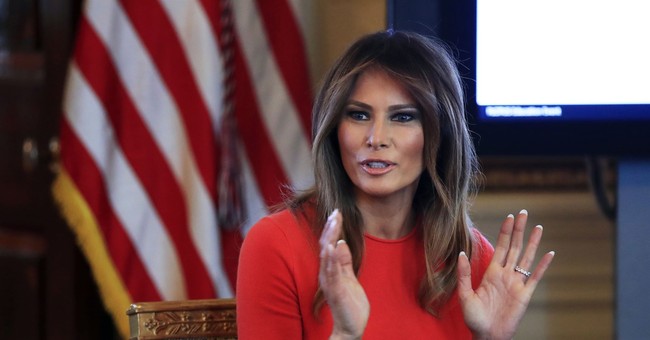 First Lady Melania Trump is growing into her role quite nicely. Last month, she executed a beautiful and widely praised state visit for French President Emmanuel Macron. The ambiance, the decor, the menus, etc. were all exquisite, according to attendees.

Mrs. Trump, however, does more than decorate. On Monday, the First Lady revealed her "Be Best" initiative. Speaking from the White House's Rose Garden, Mrs. Trump unveiled her plans to combat cyber bullying and opioid addiction.

It is a campaign "dedicated to the most valuable and fragile among us, our children," Mrs. Trump declared.

Mrs. Trump will no doubt be encouraged in her efforts because Americans appear to be warming up to her. A new CNN poll gives her a 57 percent approval rating. It's a 10-point upward swing from January. One of the most significant improvements came from Democrats, a demographic with which Mrs. Trump improved by 15 points. She also got a 13-point positive increase among women and a 7-point increase among men.

Some media surmise that Mrs. Trump's improved national image is due to all the Stormy Daniels news and that Mrs. Trump is getting Americans' sympathy. Several outlets did not report on Mrs. Trump's approval rating without mentioning the scandal.

CNN anchors and reporters gave Mrs. Trump kudos for going full speed ahead with her "Be Best" initiative despite her husband's unorthodox tweeting and "name calling."

The first lady's anti-bullying efforts are "doubly important" because of her husband, according to anchor Kate Bennett. She is certainly "not threatened" by Trump's behavior, nor the ironic backlash she may receive by going forward with her efforts, Bennett noted.

.@POTUS on @FLOTUS Melania Trump: “Everywhere she has gone, Americans have been touched by her sincerity, moved by her grace, and lifted by her love.” pic.twitter.com/tUvRg3fJaM