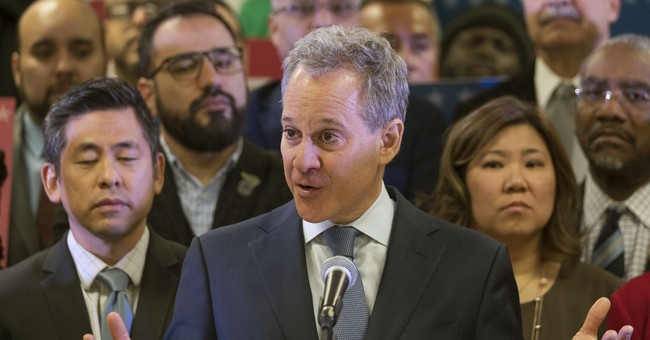 New York Democratic Attorney General Eric Schneiderman has been charged with sexual abuse by four women. They are accusing him of hurling death threats and engaging in "nonconsensual physical violence."

The report comes from none other than The New Yorker's Ronan Farrow, who blew the lid off of Harvey Weinstein's history of sexual abuse. The Schneiderman exposé is co-written by longtime New Yorker staff writer Jane Mayer.

Two of the alleged victims, Michelle Manning Barish and Tanya Selvaratnam, went on record with The New Yorker to share specific allegations against Schneiderman. Both say they had to seek medical treatment for the wounds he inflicted.

About four weeks after they became physically involved, she says, Schneiderman grew violent. One night, they were in the bedroom of his Upper West Side apartment, still clothed but getting ready for bed, and lightly baiting each other. As she recalls it, he called her “a whore,” and she talked back. They had both been drinking, and her recollection of their conversation is blurry, but what happened next remains vivid. Schneiderman, she says, backed her up to the edge of his bed. “All of a sudden, he just slapped me, open-handed and with great force, across the face, landing the blow directly onto my ear,” Manning Barish says. “It was horrendous. It just came out of nowhere. My ear was ringing. I lost my balance and fell backward onto the bed. I sprang up, but at this point there was very little room between the bed and him. I got up to try to shove him back, or take a swing, and he pushed me back down. He then used his body weight to hold me down, and he began to choke me. The choking was very hard. It was really bad. I kicked. In every fibre, I felt I was being beaten by a man.”

Another woman claims Schneiderman slapped her across the face "with such force that it left a mark that lingered the next day."

Schneiderman issued the following statement in light of these disturbing reports.

“In the privacy of intimate relationships, I have engaged in role-playing and other consensual sexual activity," he said. "I have not assaulted anyone. I have never engaged in nonconsensual sex, which is a line I would not cross.”

Barish has experienced "the most difficult month" of her life in deciding to go on record, she shared on Twitter. But, she had to "for my daughter and for all women. I could not remain silent and encourage other women to be brave for me."

If true, this report would be all the more devastating considering Schneiderman adopted a holier than thou attitude during the Weinstein scandal. He filed a civil rights suit against Weinstein to seek damages for female victims and launched an investigation into the criminal complaints against the Hollywood mogul. Now, as The New Yorker describes it, Schneiderman "is experiencing a Me Too reckoning of his own."

“His hypocrisy is epic,” Baris said. “He’s fooled so many people.”