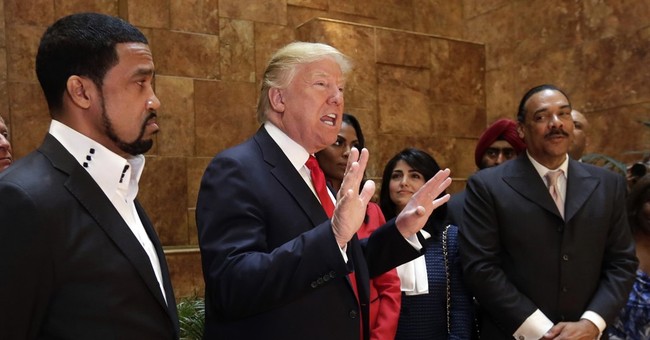 There were hundreds of African American, Asian American, and Hispanic American conservative leaders and activists in what was a standing-room only crowd at the RNC's LEAD Right Leadership Luncheon last week.

"The liberal media and the left wouldn’t want to admit it, but this is what the Republican Party looks like," RNC Spokesman Steve Guest said.

#BALERT News: Being with Leaders of the GOP around the Nation. Nation’s best of Conservatives and Republicans gathering to support President Donald Trump. Let’s go higher! #LeadRight pic.twitter.com/rinlOg2voT

During her remarks, McDaniel shared a story about Clarence Henderson, a African-American civil rights activist who converted from Democrat to Republican.

"Recently I asked Clarence to share his story about becoming a Republican," McDaniel shared. "He told me that after years of voting Democrat, he investigated the promises they had made and not kept.

McDaniel wrote an op-ed about Henderson for Fox News in February, sharing his own words about why he switched parties.

After years of voting for the Democratic Party based upon indoctrination and relying on what others said, I began to investigate all of the promises they had made and not kept. At the same time, I researched the Republican Party and what they had done to advance the cause for African-Americans. I saw that the values of the party lined up with my beliefs. I knew I was a Republican when I voted for George W. Bush.

The RNC is hoping to keep informing the African-American community about the efforts Republicans have made for jobs and the economy, especially in light of tax reform. She shared their engagement efforts in Ohio as an example.

"In Ohio, we heard from our team on the ground that minorities, in particular, wanted to learn more about starting and expanding small businesses. So we put together workshops with a representative from the Small Business Administration to answer their questions and help them navigate the process."

In Detroit, they hosted a tax reform panel discussion with African American community leaders to discuss the benefits of tax cuts.

Recently, rapper Kanye West shared his own political musings in which he appeared to warm to the Republican Party. Kanye expressed his support and "love" for President Trump on Twitter, while sharing quotes from prominent conservatives. Then, his friend and fellow artist Chance the Rapper tweeted, "black people don't have to be Democrats."

Perhaps the tide is turning against the unfounded stereotypes Republicans have for too long had to endure.