Michelle Wolf Claims Her Jokes Were Not About Appearances 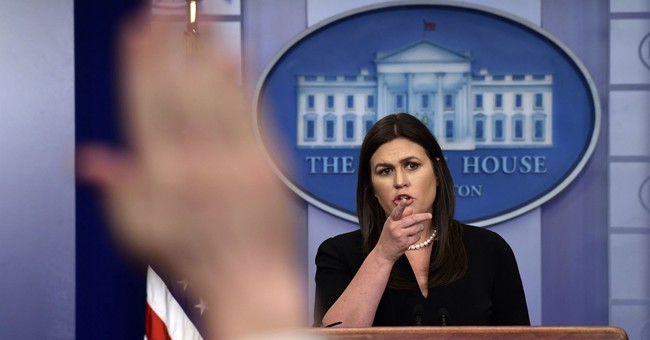 UPDATE: The White House Correspondent's AssociatIon has issued the following statement to distance itself from Wolf's behavior.

Statement from @WHCA president @margarettalev: Michelle Wolf's monologue "was not in the spirit" of the organization's mission. pic.twitter.com/dL5Y1zxQBW

President Trump also weighed in, telling the association to wrap it up or make some serious changes.

The White House Correspondents’ Dinner was a failure last year, but this year was an embarrassment to everyone associated with it. The filthy “comedian” totally bombed (couldn’t even deliver her lines-much like the Seth Meyers weak performance). Put Dinner to rest, or start over!

Many White House Correspondent Dinner attendees were shocked by host Michelle Wolf's roast of Sarah Huckabee Sanders. Wolf, a comedian who once worked for "The Daily Show," appeared to poke fun at the White House press secretary's appearance and integrity with jokes such as how she "burns facts and then she uses that ash to create a perfect smoky eye." She also compared Sanders to a sinister character in "The Handmaid's Tale" and referred to her as "Uncle Tom," as in "a white woman who disappoints other white women." Before the event, Wolf told The Daily Beast how happy she was that Sanders was "finally" invited to the prom. To make matters worse, Sanders was sitting just feet away. She, however, grinned and beared the whole spectacle.

Wolf has since doubled down on her remarks, suggesting that her jokes had nothing to do with the press secretary's looks.

Why are you guys making this about Sarah’s looks? I said she burns facts and uses the ash to create a *perfect* smoky eye. I complimented her eye makeup and her ingenuity of materials. https://t.co/slII9TYdYx

Nevertheless, several journalists on both sides of the political spectrum were appalled - including the New York Times's Maggie Haberman.

Haberman's colleague seemingly agreed, sharing his own somber thoughts at the evening's conclusion.

Unfortunately, I don't think we advanced the cause of journalism tonight.

ABC's Terry Moran failed to find the humor too.

Mocking a woman for her appearance? I guess that counts as woke now—just as long as she isn’t progeessive. Or thin. https://t.co/FjgeIcc79J

Watching a wife and mother be humiliated on national television for her looks is deplorable. I have experienced insults about my appearance from the president. All women have a duty to unite when these attacks happen and the WHCA owes Sarah an apology.

Other parts of Ms. Wolf's monologue rubbed people the wrong way. Like that time she thought abortion was funny. Here was her take on Vice President Mike Pence's pro-life beliefs.

He thinks abortion is murder," Wolf said. "Which, first of all, don't knock it until you try it. And when you do try it, really knock it, you know, you gotta get that baby out of there. You can groan all you want, I know a lot of you are very anti-abortion, you know, unless it’s the one you got for your secret mistress. It’s fun how values can waver.”

Maybe next year's host will actually be funny?