House Rep: If You Listen Carefully to Macron, He Said the Iran Deal Stinks 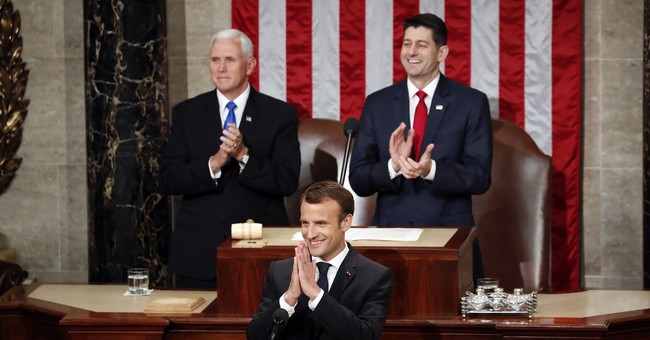 French President Emmanuel Macron addressed U.S. lawmakers Wednesday morning on Capitol Hill on the second day of his state visit. He covered plenty of issues, but what is likely to get the most attention, was his reference to the Joint Comprehensive Plan of Action, better known as the Iranian nuclear deal.

"France will not be leaving the Iran Deal," Macron told Congress, noting that it was the U.S.'s idea in the first place.

"We signed the JCPOA at the initiative of the U.S.," Macron explained. "That's why we cannot say we should get rid of it."

To many, Macron's remarks suggested he was staunchly defending the JCPOA. But Rep. Martha McSally (R-AZ) had a different interpretation.

The Republican representative said the nuclear agreement was a "crappy deal" from the very beginning that should have gone through Congress. After listening to Macron's address, she believes he is not that enamored with it either.

In his address, he noted that the nuclear agreement needs to curb Iran's uranium enrichment program, restrict their ballistic missile programs, and prevent Iran's meddling in other Middle Eastern affairs.

"If you listen to Macron, he was saying it's missing key pillars," McSally noted on Fox News.

The U.S., France, and other involved powers need to make sure they stop Iran's "malign activities." Right now, they are using the cash provided by the Obama administration to "kill people" through terror activities.

We had the "pressure" on Iran, McSally recalled, then we gave them wads of cash. The Obama White House explained that the payment was made because of how economic sanctions had affected Iran.

It was a "horrible decision" from Obama and the deal "sucks," McSally added.

Still, JCPOA proponents are hoping that Trump's "bromance" with Macron will help convince him to remain in the pact.

Iran has rejected Macron and Trump's suggestion they alter the deal, with Iranian president Hassan Rouhani dismissing Trump as a "tradesman."