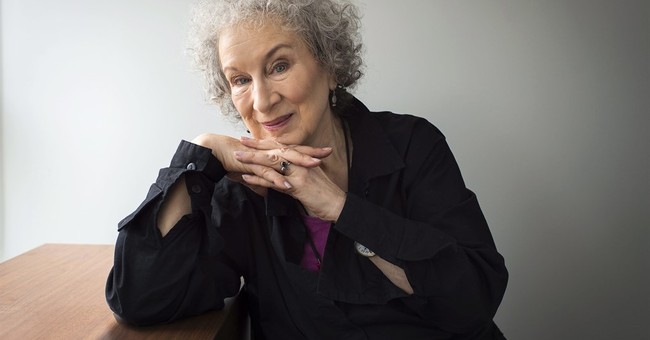 Author Margaret Atwood, the mind behind "The Handmaid's Tale," a dystopian novel that follows women trapped in an oppressive regime, seems to have a conspiratorial side to her.

In her recent interview with Variety, Atwood spoke about her latest projects, but that's not why the interview is making news. For some reason, the September 11 terror attacks came up, and she made a ridiculous claim about them.

You attended one of the women’s marches last year. What do you make of this latest wave of activism?
Typically, waves are waves. They hit the shore and then they recede and then they hit the shore again. How many backlashes have we been through? We used to have a race going on, to see which would win, between “1984” and “Brave New World.” It looked as if “Brave New World” had won. That turned out not to be true. Just to give you a very creepy feeling, there was an opera of “The Handmaid’s Tale” that premiered in Denmark in 2000. It started with a film reel going across the top of the stage and showing various things blowing up. And one of the things that blew up was the Twin Towers. But it hadn’t blow up yet. They did the opera again, and they had to take it out, because it was no longer in the future. Does that give you a creepy feeling?

Yes, it does.
They didn’t get that idea from my opera, don’t worry. They got the idea from “Star Wars.”

Do you really believe that?
Remember the first one? Two guys fly a plane in the middle of something and blow that up? The only difference is, in “Star Wars,” they get away. Right after 9/11, they hired a bunch of Hollywood screenwriters to tell them how the story might go next. Sci-fi writers are very good at this stuff, anticipating future events. They don’t all come true, but there are interesting “what if” scenarios.

Newsweek surmised what scene Atwood was likely referring to, concluding she must have meant the climactic scene in Star Wars IV: A New Hope, when Luke Skywalker blows up the Death Star.

There are plenty of 9/11 conspiracies out there, but Atwood's take may have just topped them all.

When Atwood is not peddling insane theories, she is comparing President Trump to the oppressive regimes in her stories. She has claimed that The Handmaid's Tale, which was made into an Emmy winning show, is a warning about what could happen in a society run by a man like President Trump.