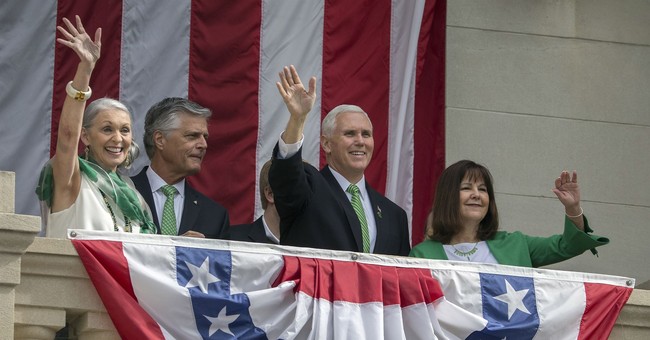 Update: Charlotte Pence offered a rather classy response to Oliver's offensive segment about her dad. She bought the HBO host's book, she said, because she is all about contributing to good causes.

HBO's John Oliver likes the rabbit (how can you not?) but he was so offended by one stop on Marlon's book tour that he dedicated a whole segment to it on his program Sunday night. Using the pet to make a point about Vice President Mike Pence's anti-LGBT agenda, Oliver informed his audience that the tour is stopping at a conservative organization called Focus on the Family. Cue a rant about how the group is anti-LGBT and how Pence has long praised their efforts. So, Oliver offered his own bunny book, one that features a gay protagonist. He urged his audience to buy one of his books instead, because it would benefit LGBT organizations.

He did not mention that the Pence book proceeds are going toward organizations helping to combat sex trafficking.

As for Oliver's attack on his organization, Focus on the Family President Jim Daly had this to say, while still offering the HBO host an invitation to the book event.

This past Sunday night, John Oliver was incensed over Focus on the Family’s 40 year history of supporting a traditional and biblical sexual ethic. In particular, the host took issue with our belief that those with unwanted same-sex attraction should be free to pursue counseling, if that is their desire. Of course, millions of Christians and even non-Christians hold to this standard, but Mr. Oliver disagrees and his seething reaction to our ministry’s position was palpable.

I’m disappointed, though not completely shocked by the animus projected by John Oliver, a man whom I have never met.

Focus on the Family is proud to host Mrs. Pence and Charlotte for a book signing next Monday, March 26th.  Though lampooned and shamed for selecting our location for one of their events, the Pences will be warmly welcomed guests to our campus in Colorado Springs.

John Oliver is welcome to join us.

Despite Oliver's bad PR, the original Marlon Bundo book has surpassed over 5,500 book sales in the last 24 hours.

Not a bad start for BOTUS!