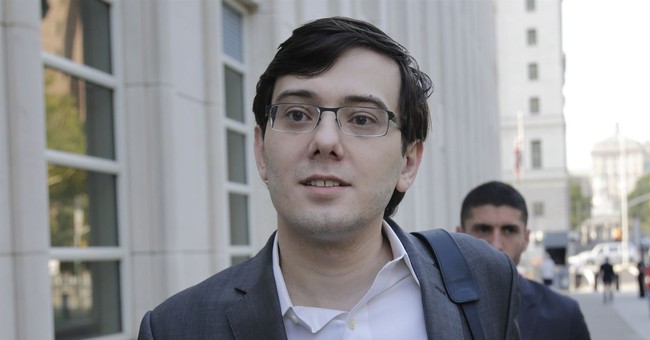 “Pharma Bro” Martin Shkreli, the 34-year-old known for hiking the price of Daraprim, a drug used to treat HIV, by 5,000 percent, was sentenced to seven years in prison on Friday for securities fraud. He had already been in prison for six months during the trial and will receive credit for that time. Shkreli's attorney Benjamin Brafman had been asking the judge for 18 months or less. Prosecutors wanted at least 15.

He was reportedly in tears when he admitted to U.S. District Judge Kiyo Matsumoto and to the investors he misled that he was "terribly sorry."

"I'm not the same person I was," he said. "I know right from wrong. I know what it means to tell the truth and what it means to lie. I am terribly sorry I lost your trust. You deserve far better."

Prosecutors told the judge not to believe him.

"At its core, this case is about Shkreli's deception of people who trusted him," they wrote. "Indeed, he compounded the lies with a pattern of corrupt behavior designed to cover up those lies. He lied to get investors' money, he lied to keep them invested in his funds and he lied once those investors wanted their money back."

Shkreli had been ridiculed for appearing to smirk throughout his trial. His own attorney recalled wanting to "punch" his client in the face.

"The only person to blame for me being here today is me,” Shkreli said at the sentencing.