'Literally No One' Invited You: Betsy DeVos Apparently Not Welcome By Parkland Students 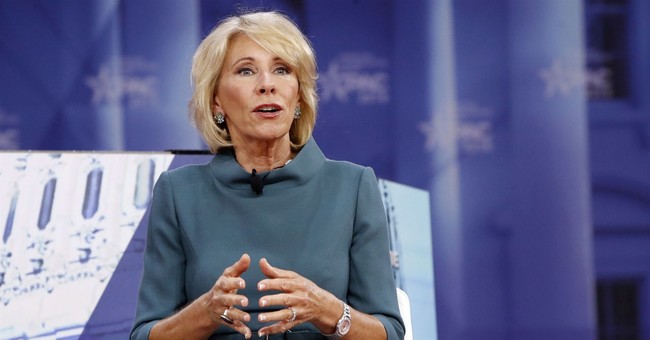 Education Secretary Betsy DeVos came to Parkland, Florida Wednesday with hopes of offering an ear or a shoulder to students at Marjory Stoneman Douglas High School who have been traumatized over last month's mass shooting. Seventeen people were killed in the carnage. The shooter, 19-year-old Nikolas Cruz, has been indicted on 34 counts.

Perhaps, in her official capacity, DeVos could offer some comfort to the surviving students.

Literally no one asked for this https://t.co/79A54IbIht

Good thing I was already planning on sleeping in tomorrow https://t.co/Oy6ALcDHLZ

Other students were upset that DeVos did not invite student journalists to meet with her during her visit.

No one would question that these young men and women are emotionally affected by last month's horror story. Yet, one of their peers, Kyle Kashuv, explained that it doesn't give them reason to disrespect a public official who is only trying to help.

Kashuv defended her every step of the way. As education secretary, DeVos had every right to offer her voice and support, he said. He chided his classmates for not offering her the courtesy of a warm welcome.

I did, actually. @BetsyDeVosED @BetsyDeVos is an American patriot and is the Sec. of EDUCATION which means she is a great person to talk with about SCHOOL safety. #MSDStrong #NeverAgain https://t.co/uzGDB8Y5Tj

I find it funny how everyone's upset at @BetsyDeVosED. If she is part of the "issue" then meeting with her should be something positive and paramount to change. If she's not, then why show her such immense disrespect? #MSDStrong

You may have first heard about Mr. Kashuv here on Townhall. Guy met him in Parkland for a candid, one-on-one interview about how his voice has been largely silenced in the media because he did not agree with his classmates' gun control narrative. Since the interview went live, Kashuv has been invited to Washington to meet with some high profile lawmakers and has been making up for those lost TV appearances.