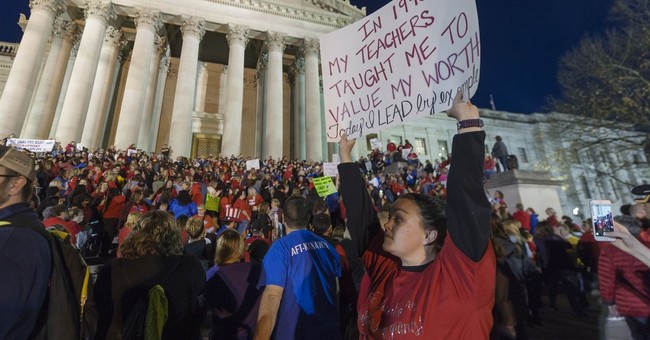 Monday marks the eighth day that teachers in West Virginia have refused to show up to work. They are on strike after the state legislature failed to meet their demands for a 5 percent raise.

Republican Gov. Jim Justice and the House approved the wage hike, but the Senate is not so sure.

"We took our time," Sen. Charles Trump explained Saturday after voting down the legislation. "The people of West Virginia expect us to do what is right. This is right."

After some discussion, the Senate came up with a version of the bill that offers a 4 percent raise. The House rejected it, and now a newly formed conference committee has three days to hash out a compromise.

In the midst of the legislative battle, nearly 277,000 students have been left out of class.

Some liberal lawmakers are applauding the striking educators.

100 years ago West Virginia coal miners helped lead the struggle for fair wages and dignity on the job. Today, the teachers of West Virginia are carrying on that brave tradition. I stand with them in their fight for justice and dignity.

The strike has plenty of critics too.

Some have pointed out, for instance, that a sizable number of West Virginia students rely on the free breakfast and lunch programs to eat. Yet, some striking teachers were well aware of that and took steps to feed them themselves. Some organized lunches at local grocery stores and food pantries, while others prepared bagged lunches.

“A lot of our students depend on school breakfast and lunch as some of their most consistent meals,” Jennifer Wood, from the West Virginia American Federation of Teachers, told TODAY. “Our teachers wouldn’t feel comfortable if their students weren’t taken care of.”

Still, working parents face the daily difficulty of taking care of children who are supposed to be at school.

Some critics say the strike is not even legal. State Attorney General Patrick Morrisey tweeted last month that "The impending work stoppage is unlawful and should come to an end." It comes down to linguistics. Because he didn't use the word, "illegal," PolitiFact concluded that statement was true. The teachers aren't criminals, but they are subjecting themselves to disciplinary action.