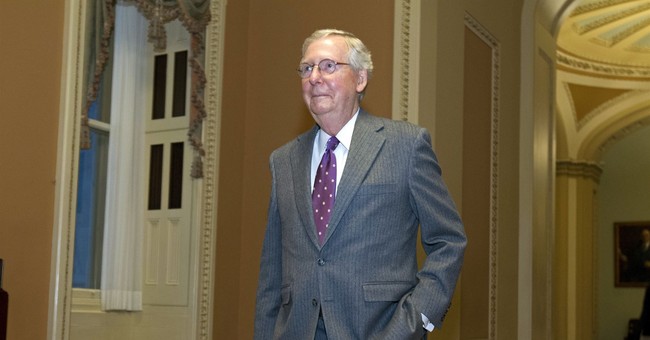 A congressional report on Russian meddling in U.S. elections was significantly "watered down" by Mitch McConnell in 2016, according to Denis McDonough, former Chief of Staff to President Obama.

"It took over three weeks to get that statement," McDonough recalled on NBC's "Meet the Press" this weekend. "It was dramatically watered down. You can ask Harry Reid and Nancy Pelosi and even the speaker of the House."

Congress showed a "stunning lack of urgency" to address election security, McDonough continued, explaining that the bipartisan report had been produced at Obama's request.

McConnell's office has responded by reminding McDonough of a Washington Post op-ed he wrote last year indicating that although Congress could have moved faster, the statement they released was ultimately an impactful one.

“This bipartisan outreach was harder and more time-consuming than it needed to be, but it was ultimately successful,” he wrote at the time.

Others suggest it was President Obama who did not do enough to address the threat. While his administration was aware Russia had meddled, reports suggest they did not immediately response because they feared retaliation.

Rep. Adam Schiff (D-CA), the ranking member on the House Intelligence Committee, said that was unacceptable.

"I think the Obama administration should have done a lot more when it became clear that not only was Russia intervening, but it was being directed at the highest levels of the Kremlin," he said.

On Monday, former Hillary Clinton campaign surrogate Christine Quinn recalled the "frustration" she and her colleagues felt after Obama sat on his hands.

In his investigation into Russian meddling, special counsel Robert Mueller charged 13 Russian nationals with conspiracy for posing as political activists during the 2016 presidential election. To Democrats' chagrin, the investigation has not found any evidence that the Trump campaign colluded with them.