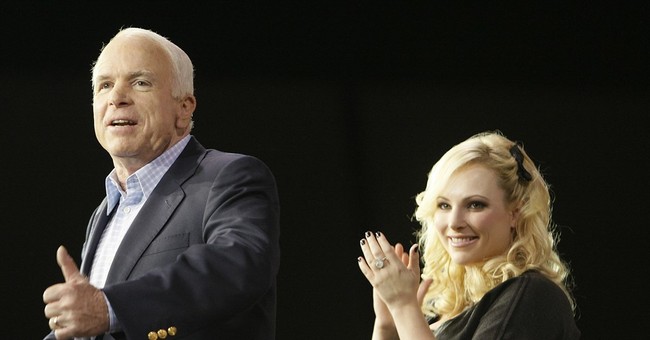 Meghan McCain, a co-host on "The View" and daughter to Sen. John McCain (R-AZ), was none too happy when 1) President Trump again mocked her dad during his speech at the 2018 Conservative Political Action Conference last weekend, 2) that attendees played along and booed her dad, and 3) that the conference did nothing to chide them.

"The View" anchor confronted ACU Chair Matt Schlapp on Friday about the moment her dad got booed.

How could Schlapp allow this behavior to go unaddressed, she wondered, especially considering her dad is currently undergoing treatment for brain cancer? Why can't there be a "modicum of respect" for her family?

Meghan McCain questions CPAC chair @mschlapp over treatment of her father at the conference while he's suffering from brain cancer: Why can't there "be a modicum of respect for my family at this moment?" pic.twitter.com/S49pYlXfQv

Schlapp said it was "a very good point" and he began by noting that McCain is "a national hero." The disagreements with the senator, he said, had to do with policy.

"I think it's okay to disagree with someone's votes in the Senate," he later added.

The panel seemed to accept his explanation, yet wondered why he didn't offer it on the CPAC stage?

Ana Navarro, a fellow panelist, Republican strategist, and frequent Trump critic, wondered where the president got the audacity to attack McCain, considering he himself was a "draft dodger." Trump, it's been reported, avoided the Vietnam War draft due to medical reasons.

Still, conservatives would agree with Schlapp in noting that McCain misled them on Obamacare. Although he once purported to be "leading the charge" against Obama's health care legislation, he ended up derailing last year's repeal and replace effort.

McCain admitted her father is not a "conservative darling," but still doesn't understand all the "vitriol" toward him.