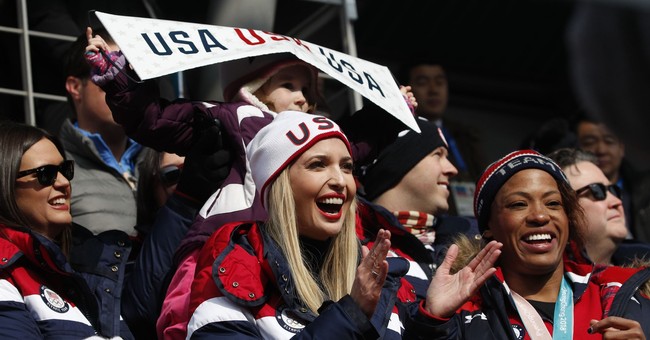 U.S. Olympic bobsledder Lauren Gibbs made Americans proud by winning a silver medal with her teammate Elana Meyers Taylor at the Winter Olympics in Pyeongchang, South Korea a couple weeks ago. First Daughter Ivanka Trump and White House Press Secretary Sarah Huckabee Sanders congratulated her on her achievement when they arrived at the Games as part of the U.S. delegation. Gibbs embraced both Ivanka and Sanders warmly, even doing a photoshoot with them. She proudly posted the photos, noting that while they may differ in ideology, they are all Americans and they each deserve respect.

Some commended Gibbs for her positive demeanor. Others not so much. The hate quickly consumed her Twitter page, with users wondering how she could be so complicit by smiling and laughing with members of the "racist" Trump administration.

Gibbs patiently responded to as many comments as she could, each time remaining cool headed. Instead of hurling insults at one another, why don't they try being civil, she suggested.

But, the rude, hateful comments became too much for Gibbs. As of Thursday, the Olympian deleted the photos she took with Ivanka, explaining she was "tired" of the disrespectful dialogue.

I deleted (by choice) the photo because I was tired of reading the hate being thrown back and forth. Whether you hate me for posting or hate me for taking it down... you are the same... hate from either side is hate... #samesame https://t.co/nXXF5no5Yl via @BreitbartNews

I don't blame Gibbs, I blame the haters. Who wouldn't be fed up with the nonsense. But, I can't help thinking that taking the photo makes the haters think they won.

Still, Gibbs at least stands by what she said in earlier tweets.

"It was allowing people to spew hate at each other which broke my heart," Gibbs added. "I still believe in what I said. I just wasn’t going to be a platform for people to be evil to each other."

Thankfully, the video of her allowing Ivanka to try on her silver medal still exists.

"I feel like this is almost like trying on somebody's wedding ring. Am I allowed?" — @IvankaTrump, asked if she wants to wear silver medal won by @lagibbs84 as part of the US's 2-person bobsled team. pic.twitter.com/omyy8XM5bI

We are all proud of you and your achievements, Lauren!