Parkland Survivor Tells Gun Rights Activists: 'We Will Outlive You' 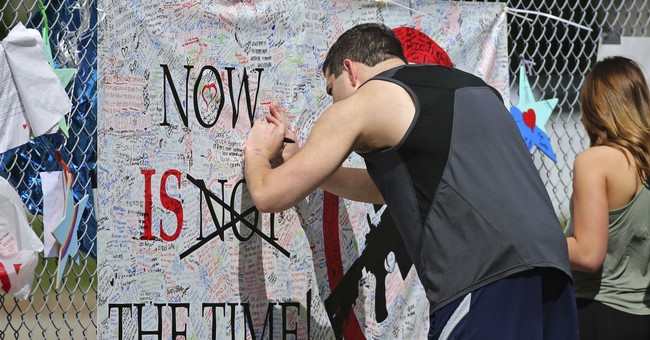 David Hogg is one of the survivors from the shooting at Marjory Stoneman Douglas High School. Seventeen people were killed when a mentally disturbed former student opened fire on students and teachers with an AR-15. In the wake of the carnage, Hogg is one of many young men and women at the school who have been insisting that we need to take action on gun control.

The networks have been tripping over themselves to especially get Hogg on their programs, presumably because his narrative fits their agenda. On Joy Reid's MSNBC program Monday, the anchor teed up her guest to respond to conservatives criticizing calls for more gun legislation.

"I'm so sorry," Hogg said, looking directly at the camera. "I am so sorry to each and every one of you that is out there attacking us as witnesses and even some of the victims of this incident. It's truly saddening to see how many of you have lost faith in America because we certainly haven't and we're never going to. You might as well stop now because we're going to outlive you."

Then there was his interview with CNN's Brian Stelter, who failed to correct Hogg on a number of inaccurate statements. He slammed NRA spokeswoman Dana Loesch (who he first thought was the CEO), claiming she cared not a whit for children's lives. She should be using her supposed power to rein in the organization, he said. Despite the group having nothing to do with the carnage in Parkland, Stelter did not question his guest.

Parkland student survivor and activist David Hogg criticizes NRA spokesperson Dana Loesch: "She owns these congressmen. She can get them to do things. It's just she doesn't care about these children's lives" https://t.co/cfOvcjtoDq https://t.co/rOqG9HzvhF

He said more of the same during his interview with ABC News's George Stephanopoulos, again with little pushback or fact checks from the host.

Hogg has also directly called out President Trump for publicly rebuking Broward County Sheriff Scott Israel and the deputies who reportedly failed to enter the school for the majority of the shooting. Trump called them "cowards" who do no credit to law enforcement.

Calling the sheriff a coward is so ironic coming from a man who evaded the draft multiple times due to his power and influence. @realDonaldTrump you're a hypocrite that is owned by the NRA please prove me wrong.

Several of Hogg's classmates made similar gun control demands at last week's CNN town hall. One student confronted Sen. Marco Rubio (R-FL) on stage, asking him if he'd stop accepting donations from the NRA. Another compared him to the AR-15.

Hogg and his fellow classmates have organized the March for Our Lives rally, scheduled to take place next month in Washington, D.C.